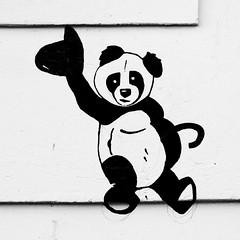 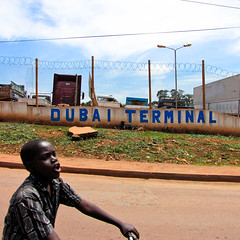 I shared my flight from Accra to Nairobi with the Ghanaian soccer team.

Kampala is in much better shape than I remembered, though this might be related to my now coming from Sierra Leone, last time arriving from Thailand.

Nevertheless, it’s really good to experience the existence of a local middle class. On my third day in town, I went for a stroll. Well, a walk. And stumbled upon three malls, a host of supermarkets, plenty of restaurants, in every price range imaginable, several day care centers and a handful of gyms. Obviously, this could not all be surviving on the country’s expat population or non-indigenous upper class.

On that same day, I had a visit of the less than enjoyable Kampala version of the Delhi belly. I had to resort to asking a furniture store for relief, where their toilet didn’t turn out to have neither water bucket nor paper. My book suffered.

I’m here to rebuild the ugandaradionetwork.com website. URN is a news service, providing radio stations with national and regional news (for a fee). Their corporate website as well as their article management system will be overhauled.

In other news, I managed to get my pics and stories up from Niamh and my time in http://babakfakhamzadeh.com/keyword/morocco/.

Round the world trip for under 2000 euro

A while back, ‘travel hacker’ Steve Kamb claimed he was going to do a round the world trip for just over 400 USD. Impressive, you might say, but he wasn’t going around the world and the hacking involved vacuuming up airmiles wherever possible, in the year prior to his trip, then spending them on his trips.
In other words, the guy still has to prove he manages it (he should be on his way now) and his feat is not at all straightforward to reproduce.

Related:  A celebration and moving on to Volgograd

For mere mortals, a round the world ticket typically starts at perhaps 2000 pounds, excluding taxes, if you’re booking through British Airways, though this would only give you some six stops. Kamb claims his itinerary, with no less than 16 stops, would normally cost 6000 USD.

I present to you a proper round the world trip in 11 (well 10) stops and 2 months for under 1800 euros. This spring and summer, bookable online right now.
All prices were confirmed in the last few hours.

Total: 1682.48 euros. Taxes and whatnot inclusive. If you want to be difficult about it, some airlines do charge you extra for paying with certain credit cards.
Then again, JetStar often has super deals from Australia to South East Asia.
Also, several of these flights, at these prices, only allow for hand luggage. So, throw in an extra 100, or so, euros to cover additional expenses and you can fly around the world for under 1800 euros. Not too shabby, eh.

Related:  /nofthree
This text is available under a cc-nc-a license.