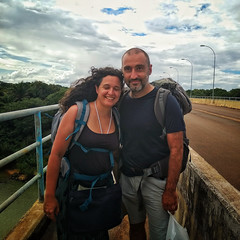 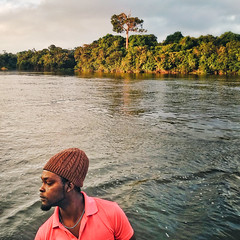 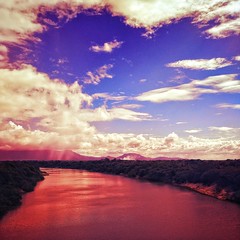 Between Brazil and Guyana 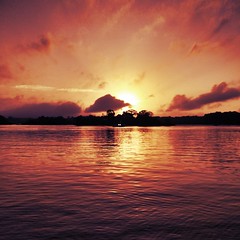 Guyana means ‘land of many waters’ in a local Indian language, and is also the name of an Indian tribe. And, wet it is, all Guyanas covered in rivers.
The colonial powers roughly equated ‘Guyana’ (or ‘Guiana’) with the area north of the Amazon river and the geological formation that’s called the ‘Guiana Shield’ is pretty much exactly that.

The country of Guyana itself is mostly quite flat. Lethem, where the road from Boa Vista in Brazil meets Guyana, is only about 75m above sea level, meaning that the whole journey to the coast has only a very small average incline.

The first part of the journey is through Amazonian savannah. Pretty much the same as its African counterpart, but devoid of larger animals. And, the road from the border to almost in Georgetown is also unpaved. Outside of the height of the raining season, it’s not in the worst of shapes, but during raining season, which the locals call ‘hard guava season’, we were told the journey time can easily double.

Guyana and Brazil have discussed tarring the road from Boa Vista to the coast at Georgetown, or more exactly, Linden, for years, but nothing has yet come of this. This would put a port within easy striking distance from Boa Vista and would significantly reduce the time required to ship to and from Manaus, a twelve hour drive, or so, from Boa Vista.
The cost of building the road is high. And, though both countries stand to benefit, Brazil would also like to have access to a deepwater port, which would also need to be built, first. In Guyana, we were told the Brazilians asked too much in return for financing the road, but earlier, in Manaus, a source mentioned that tarring the road is blocked by operators shipping goods between Manaus and the Brazilian coast at Belém, at the mouth of the Amazon river. They would see their monopoly endangered if a faster and cheaper connection to the coast would open up.

Meanwhile, the Lethem to Linden road is dead quiet; from departing Lethem, to where we broke for the night, we encountered a mere three motor bikes and seven cars. Breaking for the night, we were joined by seven other minivans all making the journey to Georgetown, most not completely full.
Part of the road between Lethem and Georgetown is closed for the night. The minivans leave Lethem at the end of the afternoon to make it to the first gate with some six hours to spare. There, you can rent a room or a hammock and have a decent night’s sleep, which makes the whole journey vastly more agreeable.

Earlier, as night set in, we drove through fields of fire flies, literally as if the fields were covered in Christmas lights.

Lethem is popular with Brazilians for shopping. Apparently, Chinese made goods are cheap, which must be because of a lack of taxation on the Guyanese side, as transport to this border town from the Guyanese coast is hardly cost effective. But sure, most of the shops in Lethem were catering to Brazilian visitors, who are free to come and go across the border, stamps not being necessary if you’re not staying on the other side.

But stamps are necessary if you are actually traveling into the interior.
The Brazilian border control breaks for lunch, and when we arrived at the border, we found a troupe of twenty or so, what we thought were Guyanese, waiting in a queue to be served. They turned out to be Cuban, who, we were told, can freely travel into Guyana, but, they told us, not out of Guyana to countries other than their own, meaning they had managed to clandestinely cross the border and were now going to ask for refuge.
The fixer that had latched on to us, looking for customers to shuttle to the coast, chaperoned us to the front of the queue, being familiar with how long the Cubans would need to be cleared for entry. Then, walking across the border into Guyana, just off the main road on the Guyanese side, but several hundreds of meters before (or after) the border guards’ office, a minivan stopped, a cluster of Cubans emerged with their luggage, and sprinted across the border.
Our fixer told us that, a few weeks ago, when he himself had brought a bunch of Cubans across the border, Guyanese border guards had managed to catch a few, demanding 150 USD per Cuban to look the other way.

Related:  Island, or not

We finally left Lethem at around 5pm. Our driver was trying hard to fill up his van, struggling, which he blamed on it being Christmas Eve. Eventually giving up, it meant Natalia and I had the back seat to ourselves.

Two girls on our bus, Brazilian, but fluent in the local Creole, went halfway, where they run a little fast food shack just after crossing the Essequibo River. Two other passengers then shifted to another bus that was now empty, illustrating how quiet the Lethem to Linden road actually is.

Our driver makes the trip about three times per month. At least some of the drivers were working together in concessions, getting a fixed fee for making the journey, or so we were told. To augment their income, many were doing deals on the side. Ours was shipping songbirds, bought from Amerindians in Lethem, to Georgetown, where he would sell them at a steep profit, buying them for around 25 USD, selling them for double that.
Another driver had got himself a huge parrot. “You know, for my kids!”

One Reply to “From Boa Vista to Georgetown”