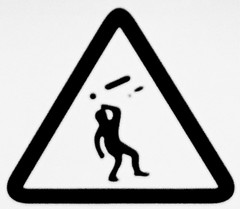 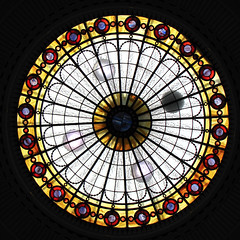 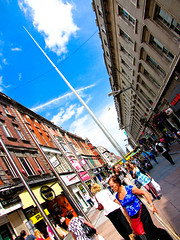 The Stiffy by the Liffey 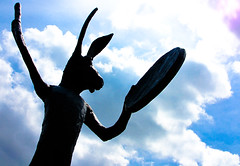 In Ireland, Niamh’s friend Caroline picked us up after the bus ride that was Ryanair’s trip from Eindhoven to Dublin. Not only have they succeeded into minimizing the cost of air travel, they also are experts in tagging on all sorts of non standard nonsensical charges, increasing their potential income.
The most annoying is the traveler’s responsibility to print a boarding pass. If you check in without your own printed A4 piece of paper, you have to pay Ryanair 40 euros for the privilege of having one printed for you.
Still, that said, the whole less then very convenient trip still came in at an extremely affordable 41 euros each. So cheap that the hassle can only be a necessary evil.

Besides Caroline, the Sunday afternoon of our arrival also saw many a drunkard on the Luas tram in Dublin. Hello Ireland.

With Niamh having to visit her new employer in the seaside town of Dun Laoghaire (that’s Dun Leary, for you Gaelic-impaired speakers), which turned out to be a fairly boring place, I did manage to secure 3G access through Vodafone for the coming two weeks. I will be able to fuel my addiction.
Also Dublin, though quite lovely when it’s not raining (and it’s a surprisingly dry city) couldn’t excite me as much as it did on my previous visits. Perhaps it’s simply not exotic enough anymore for me.

Also, it’s definitely a rather expensive city. And there’s quite a bit of poverty. When Niamh, Caroline, who generously offered us her bed while she slept on her smallish couch, and myself had a drink in one of the downtown pubs, no less then 8 individuals asked us for money and/or smokes. Some several times. Africa, what, what?
This week, Europe-wide statistics were released revealing that, overall, Ireland was 30% more expensive than the European average, only Denmark being more pricey.

I did spend half a day in town, being the tourist, visiting the Irish Museum of Modern Art, which I found only so-so, and the Dolls store, a shop selling teddy bears and dolls which also runs a teddy bear clinic, where you can have your favorite teddies fixed up.

Another more pervasive fixture of the Irish shoposphere is the presence of stores pawning eastern European wares, with particularly Polish stores being popular, even though the number of Poles in Ireland could be as little as 1 in 100. Even more obscure, just off Henry street, one store thought it viable to only sell Lithuanian warez.
On the other hand, quite a bit of cheap labor, particularly in the catering industry, at least in Dublin, seems to be staffed by Poles.

And here’s more on said stiffy.