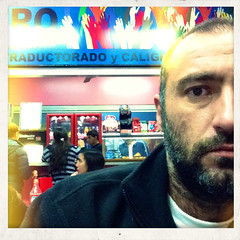 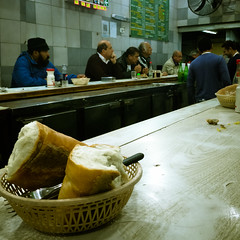 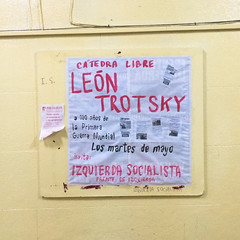 Over the past week, the weather forecast consistently predicted five more degrees for Buenos Aires then for Colonia, just 50km across the Rio de la Plata.
But, upon arrival, it not only felt colder, autumn seemingly having turned to winter during my boat ride, there was also a consistent drizzle to welcome me to Argentina.

My first struggle was in finding an ATM. And then, my maximum takeout was also annoyingly low, with an unreasonable fee tagged on top. And most of the shops won't take cards, though some do take American Express, supermarkets seemingly being the only exception, accepting the whole lot.

Perhaps this is due to Argentina's longtime running financial squalor, but I suspect not. The currency is so unstable that just across the bay, the spread for bying and selling the Argentine peso was over 50%.

Peckish from wondering around in search for a bank, I entered a small eatery for lunch. An elongated room with a horseshoe bar, filled with patrons coming in for a quick, hearty, meal, grilled chicken with mashed potato or rice being the favourite, washed down with either a vaso de vino or a small bottle of agua mineral. Every time an order would come in, the waiter, from behind the horseshoe bar, would repeat it, shouting to the cook in the back.
The diner wasn't off limits to the working classes, either culturally or financially, everyone from (aspiring?) businessmen to construction workers coming in for a hot lunch. In itself an indication for a fairly egalitarian society.
But, though the poverty gap in Argentina is, it is said, less an issue than in Brazil, during my 45 minute stay in the diner, half a dozen vagrants came in asking for the scraps of people's lunches. Disturbing for its immediacy, it's tempting to think that this might be more the results of the recent financial turmoil than of a more structural imbalance in society, though I was later told the opposite. Many of the parks and monuments in Buenos Aires are surrounded by fences to prevent the homeless from crashing there for a night.

My lunch was great. Besides the vaso de vino, I got myself a salad of crunchy tomato with onion and a tortilla de papas, really only a chips mayai in disguise, a Dar es Salaam favourite.