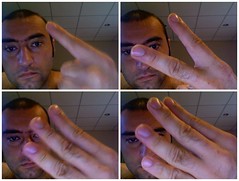 “Life as it is. I’ve lived for over 40 years and I’ve seen… life as it is. Pain… Misery… Cruelty beyond belief. I’ve heard all the voices of God’s noblest creature. Moans from bundles of filth in the streets.
I’ve been a soldier and a slave.
I’ve seen my comrades fall in battle or die more slowly under the lash in Africa. I’ve held them at the last moment. These were men who saw life… as it is. Yet they died despairing. No glory. No brave last words. Only their eyes… filled with confusion. Questioning ‘why?’. I do not think they were asking why they were dying… but why they had ever lived.
When life itself seems lunatic, who knows where madness lies? Perhaps to be too practical is madness. To surrender dreams, this may be madness. To seek treasure, where there is only trash. Too much sanity may be madness.
And maddest of all: to see life as it is and not as it should be.”

By Miguel de Cervantes, a quote from Don Quixote, a book I sort of read but, obviously, missing this quote the play I, Don Quixote by Dale Wasserman, made into the movie Man of La Mancha with Peter O’Toole in 1975. So beautiful a quote, it’s painful.

The quote also makes an appearance in Hephaestion‘s mix Ambient Nights – Life as it is.
I’ve been a long time fan of Hephaestion and recently downloaded (legally, from his own site) a series of his albums, including the aforementioned one which starts with the above quote. The albums are good, the quote is stellar.

Sitting at restaurant Lek’s corner, shortly after a short monsoon swept away unlucky individuals out on the street, a sizable Indian elephant stopped by to be fed. It’s not that elephants are as common a site here as, say, cars, but they’re not too much out of place. The ones that walk the street are often chaperoned by a mahout and one or two touts, selling sugarcane to, mostly but not only, tourists, to feed to the elephant. It’s known that many of these elephants are treated very badly to domesticate them, but this one was so sweet, we couldn’t stand it and bought Tong Deng, Red Belly, some snacks.
The sugarcane is packed in plastic bags. You take the sugarcane out and hold it towards the elephant, who’ll pick it up with his trunk and put it in his mouth. Afterwards, you can also hand him the plastic bag which he’ll pass on to the mahout, the ‘driver’ on his back.
When we were done feeding the beast, he thanked us by trumpeting a few times, raising his trunk to his forehead and flapping with his ears. Shortly after, he strolled off again, in the dark, notifying traffic coming up to him from behind with a red light tied to his tail.

I’ve upgraded from 1GB to 4GB of internal memory and also moved from Tiger to Leopard. That’s Mac OSX 10.4 to Mac OSX 10.5, for you infidels out there. All went quite smoothly.
During my wait, I had a very good palak paneer at a nearby restaurant while thoroughly enjoying one of the cigars Betsy sent me and also lounged on my bed while Vlekje (‘my’ cat) was grooming me.

Related:  Istvan Kantor in Chiang Mai
This text is available under a cc-nc-a license.