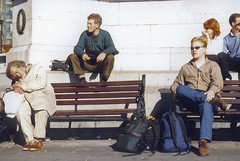 Notice to bum on the right 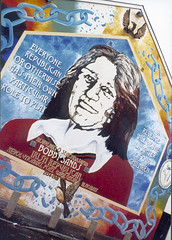 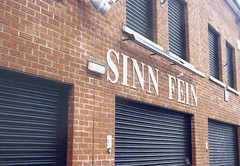 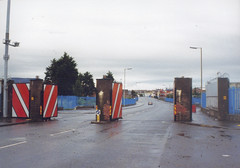 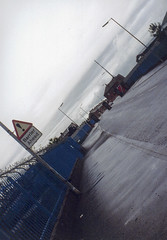 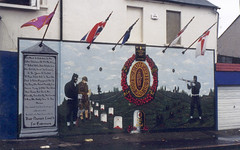 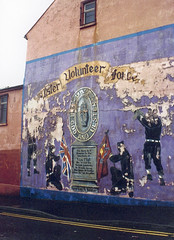 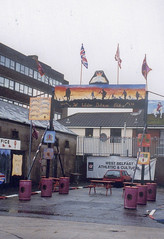 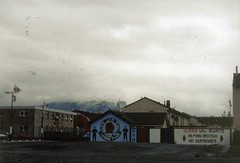 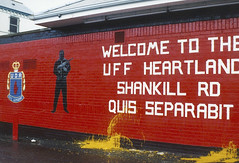 Welcome to the UFF heartland 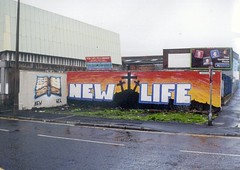 Most of the clashes in Belfast happen around two streets. These are Shankill Road and Falls Road. One street is filled with Protestants, the other with Catholics. The one favoring staying with the UK, the other wanting to become part of Ireland.
Walking down Shankill Road really was a remarkable experience. The closer we came, the more houses had bars for the window. In Shankill Road itself, all street lights were also carrying flags to show off the identity of the people living there. And many walls were filled with paintings, commemorating the dead or the cause they had been fighting for. This, combined with the streets being almost completely empty of people made for an eerie experience.

There's one street connecting Shankill Road and Falls road. The street is completely fenced off and, in the middle, a number of stalls, although not manned, make for a makeshift border patrol. A gristly testament to what has happened in this area and might happen at any moment again.
Falls road, the Irish Catholic street seemed a little bit more lively.

It was interesting to see the headquarters of the political branch of the IRA, Sinn Fein, although it was a pity to see it closed.
Later in the day we took a bus back to Dublin, spending another night chilling away in this most friendly city. The next morning, unfortunately, our plane did leave in time, leaving us no free ticket to use up later this time.

Related:  Wrap ups and challenges
This text is available under a cc-nc-a license.