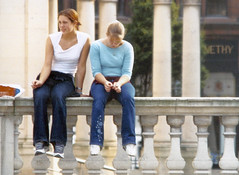 Babes on the wall 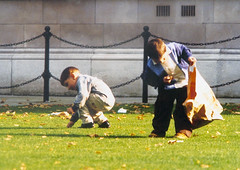 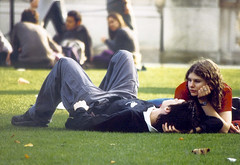 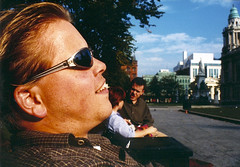 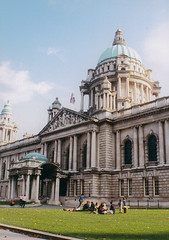 The weather in Belfast was really beautiful. We spent several hours on one of the benches in front of Belfast's city hall, lounging in the sun. As you can judge from the picture, we weren't the only ones. Mainly schoolchildren or university students were playing music or taking a nap in the sun.
Remarkably, although I expected otherwise, we didn't notice much from the string of problems that have plagued Northern Ireland for the last couple of decades. Everything seemed to be peaceful and quiet and all the people we met and spoke to seemed to be friendly and open.

For most of the time that Joost and I were enjoying our fine spirit and the sun, two small kids were collecting leaves in large plastic bags. Most probably, it was their first time ever doing so, since very often, the bag with collected leaves would topple over and, without hesitation, they would start anew with fresh spirit. Or maybe these kids were already used to pointless repeating processes, such as the one that's plaguing Northern Ireland for the past time.

We spent an expensive but fun night out in Belfast. First a good meal in a nice Italian restaurant, then a good beer in a regular pub. To topple the night of, we went to a student party. At least we thought so. The 10pound price tag seemed to be a little hefty.

When going back to the hostel, the house just next to the hostel seemed to have a party. All students from either Belfast or around, they invited us up for a drink. I talked for some time with one guy from Portadown. The first thing he said was: "Really, it's not that bad over there."
The next morning, we came closer to the Northern Ireland 'issue'.

Related:  Bombay dance
This text is available under a cc-nc-a license.