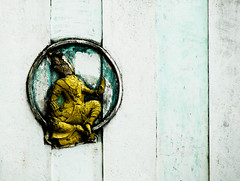 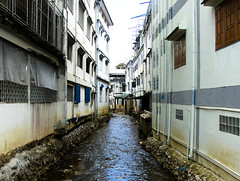 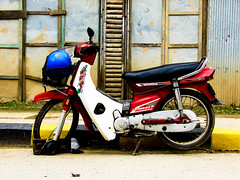 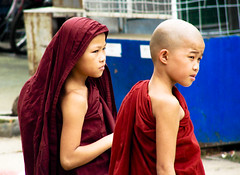 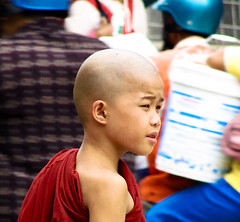 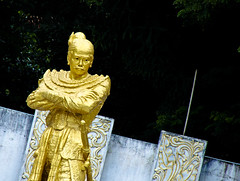 No. Vlekje hasn’t resurfaced. It’s now been a week and a day. Nobody has seen her since Thursday morning, in fact, I’m probably the last one who did see her.
What I don’t get is that she disappeared in the middle of the day. I don’t think she ever left the premises of the guesthouse, she’d stay in my room, leave for half an hour or an hour, at most, and then would walk in again and crash on the floor, my bed or my lap. So, indeed, when she hadn’t come in during the afternoon last Thursday, I knew something was up.

I’ve looked all over the premises, between the double outside walls, surrounding the grounds, in the nooks and crannies in and around the place and I even climbed on to a neighbor’s building. And found a bunch of chickens living on a roof.
But no Vlekje.

What bothers me the most is the possibility that she’s hurt, somewhere, and has no way to get out, with no one to find her. And that she has no abstract concept of death. If she was indeed hurt, how can she possibly understand what is happening to her. That, what must be, total confusion, hurts the most.
Specifically over the last few months, she had really become my cat. She’d complain if I had to pick her up, with little near-meows, when I had to go out and she’d welcome me back, with a staggered meowing, when I’d return, as being worried for my absence, walking into my room with me, bumping into my legs and jumping onto my lap as soon as I’d sit down.
Her grooming me gave me the impression she considered me one of her kittens. Unruly perhaps, for going off without her permission, but always welcomed back. She’d box one of the other cats if he or she tried to get in the door when she was here.

More recently, she’d also found a place to sleep on the TV, I suppose so that she could keep an eye on me when working. If not content, say if I hadn’t given her dried fish strips for too long, she’d try to push over the knickknacks I keep on the TV. After which I’d pick her up, hugged her until squeezing and take her down from the TV, her crawling up on my lap.

Since coming back from Mexico, she didn’t miss one night staying in my room. When going to sleep, she’d walk up to my face, as if checking if I was all ok, before rolling up into a nook of one of my legs, waking up as late as me or even later, looking at me sleepily when I’d slowly get up, giving a huge yawn before curling up again.

I so miss her.

I went on a visa run to Myanmar last Monday. It was very uneventful, besides the van having no brakes, which was interesting on the hilly road to and from the border.