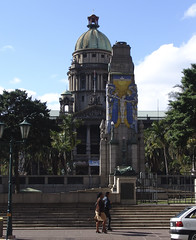 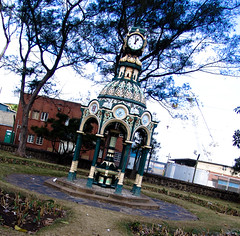 During our five weeks, we only had a couple of rainy days, but today was one of them. We visited the Alayam Hindu Temple, small but the oldest and biggest in South Africa, and promptly were invited to join a wedding ceremony, after which we were completely stuffed with food.

Also, it finally dawned on me what the many black kids lying around, all painted white, we had seen almost everywhere over the past couple of days, were doing: Xhosa boys going through their coming-of-age ritual.

Durban has three main malls. There’s one downtown, The Wheel, only visited by blacks and although it used to be popular, it’s now nearly empty with shops. Another one is right on the waterfront, Sun Coast, which is packed with entertainment, including a huge casino, and it’s always filled with Indians. And there’s Gateway, some 15 kilometers away, where all the whites go. What do you mean no more apartheid?

Sun Coast casino, and the others we saw while in South Africa, kindly request patrons to leave their fire arms at reception.

Related:  Moldova! Not Moldavia! Duh!
This text is available under a cc-nc-a license.