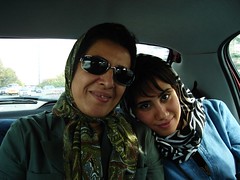 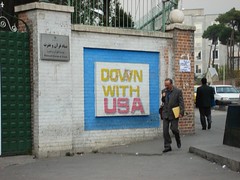 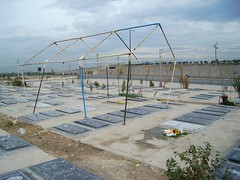 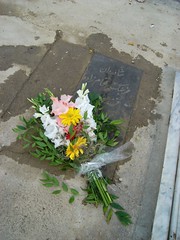 Quiet days in Tehran. The family all wants a piece of me, meaning I have no real choice but to visit Bushehr, and visit Abadan and Khoramshar (both on the Iraqi border, woohoo) with one uncle, and go to Mashhad to visit Gorgan with another uncle.
Had a bite at 'King Burger' or 'Burger King', the joint didn't seem to know for sure themselves, using the actual Burger King logo to pull people in. The fast food joint was located right next to an 'IKEA' store.

One morning, visiting the 'Den of spies' (the former US embassy) and the Iranian Photography centre. Both were closed, although the nearby Artist's House had a very decent and quite large photo exhibition, although the many shots of Ahmedinejad were a bit too much.
The day I arrived had just seen a major demonstration right in front of the former US embassy, commemorating the anniversary of the hostage crisis, which started in 1979 and lasted for an impressive 444 days. The Den used to house an exhibition, amongst others with shredded documents from the embassy painstakingly reconstructed and 'proving' undercover and clandestine US activity in post-revolutionary Iran. All that remains now are the aggressive, painted but flaking, remarks on the Den's outer walls.

While family is pulling at me on all sides (one of the results being stuffed, having to eat way too much, hence the title of this article, meaning "Eat, eat!"). But, before the more busy parts of my trip (the one year's commemoration of the death of my father and the aftermath) begin, I'm leaving on a 10-14 day trip to the Iranian heartland, today.

Related:  Food and fun in Malaysia

Unfortunately, Flickr has been blocked in Tehran, even though it was working fine in Tabriz. So newly uploaded pictures might have to wait until Turkey.