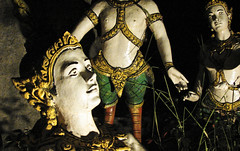 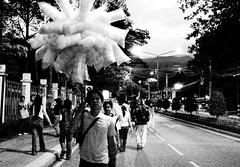 The blind are coming 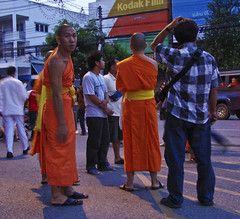 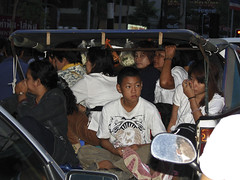 Today is Visakha Bucha, which Wikipedia catalogues under Vesak, a celebration of the Buddha, institutionalized as late as 1950, but celebrated across the whole buddhist world.

Here in Chiang Mai, seemingly everyone celebrates the day by walking from town up to Doi Suthep, a temple on the mountain next to the city. A decent 14 kilometer hike. What's more, they do it the night preceding the holiday, starting anytime from 6pm onwards.
Then, after celebrations at the temple, many walk down again, arriving back in town in the early hours of the morning.

Just to see what the fuss was about, I threw myself in the crowds and walked up the mountain for a bit, only to get too bored and disinterested enough to come back down again after a kilometer or two.

There's a strong British presence in Thailand in general and Chiang Mai in particular. No, no military or political presence, it's older retired men with young Thai chickies. Testimony are the many pubs and the many pubs and restaurants selling (very decent) fish and chips, most of them claiming that theirs is the best in Chiang Mai.

On a lighter note, some very cool photography (found through this blog post). And also a few interesting sex toys.

Related:  Not Issyk-Kol
This text is available under a cc-nc-a license.