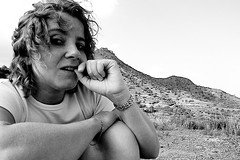 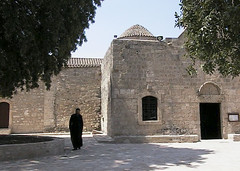 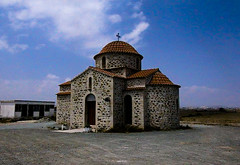 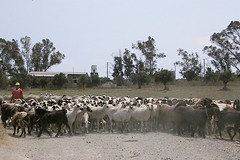 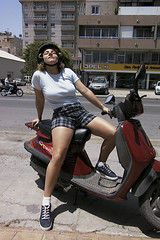 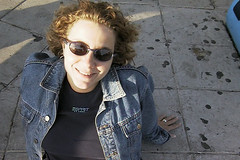 Waiting for a bus 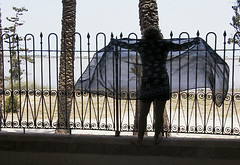 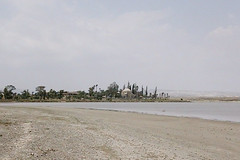 Cyprus is not very well endowed as far as public transport is concerned. Although it's a very small island (some 250km from east to west, 150km from north to south), only occasionally does public transport go between the major towns on the island. It basically means that you either travel slowly or get your own transport, so we rented a scooter.

Although the island has quite a cultural history, the earliest settlements have known to exist more than 10.000 years ago, the historical sites are relatively few and far between. We spent the first afternoon in the area around Larnaka, driving to a couple of places and trying to not get into too much trouble with our scooter. Since I was driving, this was harder than you might think. And not just because sudden accelerations or braking meant my girlfriend holding me even tighter.

Close to Larnaka airport, we drove to the Hala Sultan Tekkesi. In fact, it's so close to the airport that, when landing, it's quite hard to miss the small mosque on the side of one of the country's salt lakes.

A couple of years ago, in 674, the foster aunt of the prophet (that's Mohammed for you infidels) was so stupid as to fall from a mule and die. Supposedly, it's the fourth most important pilgrimage site in the Muslim world. However, I've heard that about a couple more sites around the Middle East. Although it's difficult for Northerners to go to the south, twice a year, in a sort of exchange agreement, people from Northern Cyprus are allowed to make the pilgrimage to the mosque. In exchange, Southerners get to visit a monastery in the North.

The mosque isn't all that interesting and almost empty at that. When we visited, a group of people were working on the outsides, renovating the courtyard and building a small park. Inside, we got a tour from a friendly curator for whom, it seemed, we were the first visitors of the day, at two in the afternoon.

A church built by angels

Our next stop was the Panagia Angeloktisi Church. Although it sounds like a curse, the title of the church means nothing more than 'built by angels'. How could you NOT know, eh? Before getting there, we had to drive through a bit of country side and we encountered a bunch of goats and sheep with a goat herder. Trying my best goatese, I immediately scared them into running away from us, causing quite a bit of trouble for the Egyptian goat herder.

The church itself is rather nice, even though every 30 minutes or so a new bus with tourists is unloaded on the square in front of the church. The main feature of the church is a small collection of 6th century mosaics, which were only discovered in 1952!

On a 700 meter high hill, just a bit north of Larnaka, there is the Stavrovouni Monastery, which is the oldest monastery in Cyprus. Its main feature is its location, since it truly allows for some very nice views over the coast and also the Troodos mountain range. The biggest problem with it is that no women are allowed to enter. We thought about not going there, but since the views were supposed to be great, we decided to go anyway. It's not like they can block out the views when you're not inside the monastery itself.

Betsy stayed outside; I went in for a short while and was welcomed with open arms. I was wearing a long robe and it seemed the monks received me as being very faithful and pious. I didn't contradict them.â€¨The name of the monastery means 'mountain of the cross', where 'stavros' means 'mountain'. The mountain is obvious; the cross is the silver cross, inside the church, in which a piece of an original cross is preserved, where a nail from the cross on which Jesus was crucified was used in. Geddit?

Close to the monastery, there's the 'Chappelle Royale', built by king Janus in 1421. Its French name and the French wall frescoes are its main assets. King Janus, the last Crusader king of Cyprus, was French. The chapel itself is rather small and only mildly interesting and here, too, we realized that the country as a whole mostly gets tourists who only stick to the coastline: at 6 in the evening, we were the 4th couple to visit the chapel that day.