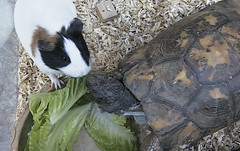 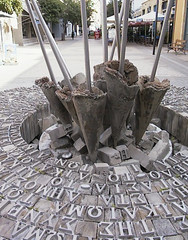 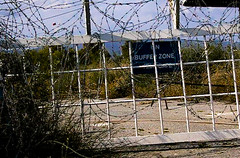 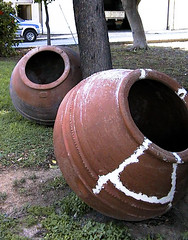 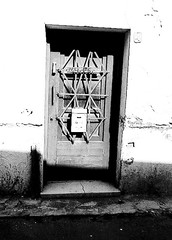 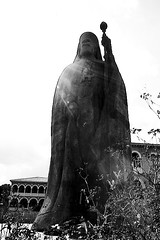 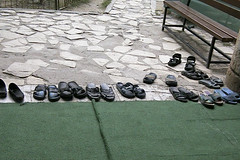 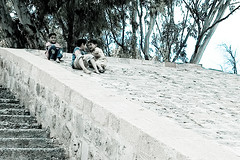 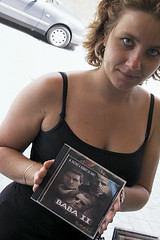 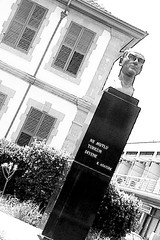 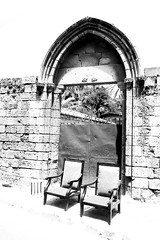 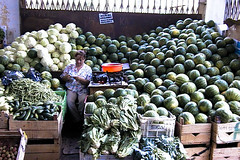 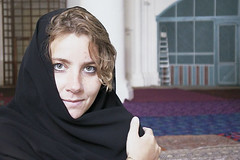 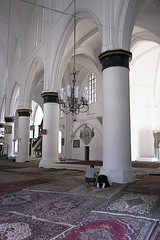 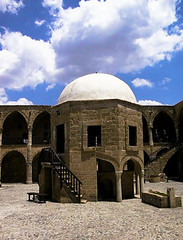 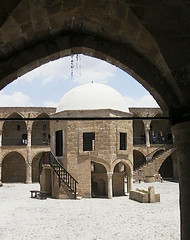 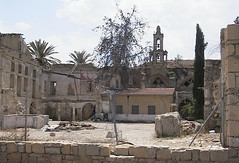 On the Turkish side 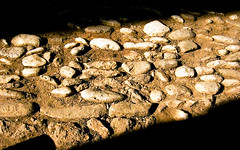 After a day at the beach, we headed to Lefkosia, the country’s capital. Again on a rented scooter. The country has two mountain ranges, one in the center of the island, in the Greek part of Cyprus, the other in the north of the island, in the Turkish side. On the hills of the Turkish side, the locals painted (I suppose) two large flags that you can see from miles away. The two flags are the Turkish Cypriot flag and the Turkish flag.
Of course, Lefkosia’s main feature is that it’s the last divided capital in the world. We first decided to visit the Turkish area. Although close to Pyla, there’s a border crossing where border control isn’t strictly enforced, the one border crossing inside the capital is the only place were you’re allowed to cross from the Greek side to the Turkish side. Given that you’re back by 5pm. It’s impossible to cross from the North to the South.

There’s a small area between the two border crossings with a large UN post in the middle. The UN post is a former hotel that has been confiscated by the UN for sleeping quarters. Strangely enough, there are also a couple of shops inside no man’s land that are still open. They didn’t seem to sell much though. Although the cities in the south occasionally have a Middle Eastern atmosphere, the Northern part of Lefkosia is unmistakable Turkish; the small streets, the shops, the houses, the mosques, all point to Turkish rule.

The most awkward feature of the north, although occasionally, you also find them in the south, is churches that have been converted to mosques. The most popular one, and the strangest one at that, is the Selimiye mosque. The building was finished as the gothic Church of Agia Sofia in 1326, after Louis IX, on his way to the Crusades, offered the help of his retinue of builders and artisans. When the Ottomans arrived, they stripped the church, built two minarets and converted the church to a mosque.

Related:  A wedding in China

Another fine structure we visited was the Kumarcilar Han. The building is a caravanserai, or middle age Turkish hotel. The structure was recently renovated and radiated a very nice and quiet atmosphere, the kind of place you could imagine Mediaeval travelers would love to stay at, enjoying the coffee, women and tea.

A very nice feature of the whole city is the Venetian walls, built around the whole city by you’ve guessed it, the Venetians. The walls were built to keep the Ottomans out and although they’re pretty big and impressive, they never managed to serve their purpose.

The southern part of the city is in better shape as compared to the northern part and has a couple of nice features. One large Venetian building is fronted by a huge statue of Archbishop Makarios and, supposedly, the most photographed subject in the south is the Famagusta gate which, as it happens, is always closed. We didn’t find the gate very impressive and we’re more intrigued by the way the north/south line divides the city, with border posts along the whole line.

In some locations, you get a glimpse of the area in between the Greek and Turkish borders and its strange to see the area, where people used to live up to 1974 has been mostly grown over with weeds.