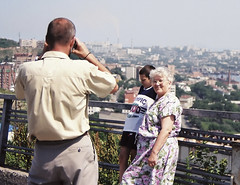 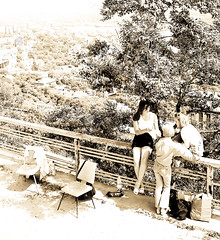 I had had a bad night's sleep. It was very hot and I had to kill over 20 mosquitoes before I had enough time between killing each two to have a chance of falling asleep before it was time to kill the next one.

After picking up the train ticket to Khabarovsk, I wanted to take the ferry to the other side of the bay. It being a total chaos on the piers, I opted for some Chinese food instead. A very small Chinese girl was selling bags of mushrooms, fish, peppers, etc on oil and sour at very high prices. Misjudging the cost, I ordered too much and I had enough to eat for the next two days.

Picking up the train ticket wasn't an easy task this time. Finding where I could by them (in the renovated train station) wasn't too hard. Finding the right line to stand in and communicating to the ticket lady what I needed, was. After waiting a long time and trying for what seemed a longer time to explain what I needed, a man jumped in, offering to help me. I asked if he spoke English, 'Of course', he replied. He started talking with the ticket lady, and I started to make clear, to him, what I needed.
However, he didn't seem to notice I was talking to him. After some time, he looked up at me, startled, as I asked if he understood English. 'uhh… no!' he replied.

I bumped into Kostia again. This time close to the hotel. I had a feeling it wasn't totally a by chance meeting, since again he was carrying something for me. This time, a 1942 book about Vladivostok. In Russian of course.

Being tired because of my short night, I headed off to the Krishna cafe again for a bite to eat and a lazy afternoon. It being busy inside, I shared a table with An. A girl from Russia who was studying medicine in New York and was hoping on finding a steady job in the States after finishing her studies. She was going to fly back to New York the next day. Via Moscow. She told me it was two hours longer to fly via Moscow, but also half price as compared to going in the other direction immediately.

In the evening, this time, I didn't meet Kostia. I did meet two Russian sailors (one of whom was called Viktor) with whom I spend most of the evening. Talking about Russia, beer, women, foreigners and all the stuff where young people talk about. It was a funny meeting, since they both weren't really interested in me buying beer for them (a first!) but far more interested in talking with me about whatever there was to talk about. (As so many Russians I now had met, Viktor was of the opinion that everyone 'official', from Boris Nicolajevich down, is a thief.)
Eventually, the sailors went to some bar. I went to the hotel, dead tired.