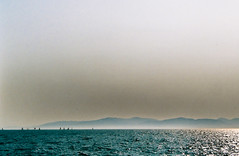 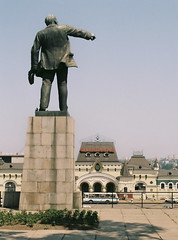 There... there is where the money will come from 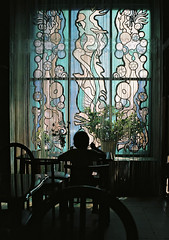 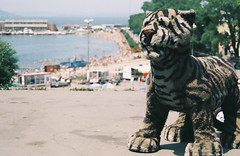 Beach and a tiger 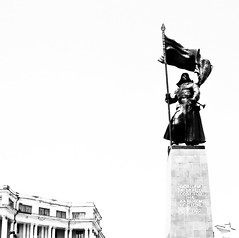 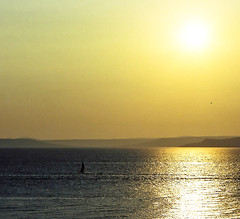 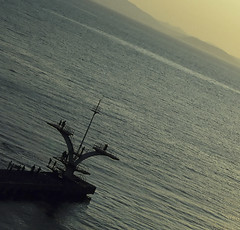 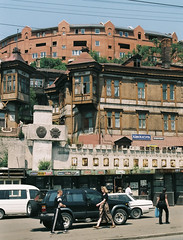 One of the few places in Russia to have one, I was able to visit a vegetarian restaurant the next day. Run by several Hare Krishna's, the food was very enjoyable and I finally was able to decrease my backlog of vegetables.

The woman behind the counter spoke nothing but Russian and although, by now, I had picked up enough Russian to be able to order food in a restaurant (at least I thought), she had no problem to misunderstand me completely, continuously. I finally resorted to pointing to someone's plate to make it clear what I wanted to eat. That person, a woman, also Hare Krishna, had no idea what I wanted either and invited me to share her food with her. I finally was saved by two Indian guys, one of which spoke Russian and English, who explained my wishes to the waiting woman. I was saved, I was about to eat!

The Indians came from Moscow. One of them had only recently moved to Russia (from New Delhi) and was to set up some sales office in Vladivostok. The other (the one who helped me out) managed a sales office in Moscow, actually selling Procter & Gamble products throughout Russia. He had flown, from Moscow to Vladivostok, for not more than $75! Much less as what I had paid for half that distance!

Walking back to the hotel, I met 'Andre'; an interpreter and guide at the hotel who thought about going to Japan and making loads of money there. He spoke some four languages of which Japanese was his first language after Russian and was surprised, every time, at how much money he could make when working for the Japanese. Telling me the story of his life in less than 10 minutes, I learned about his corrupt brother, his history as a drug dealer and user, the Russian mafia (Mr. Yeltsin being one of them), Vladivostok and his idea that it would take one generation for Russia to change. Remarkably, in front of the hotel, an old-skool 'beetle' with German license plates was parked.

In the evening, I bumped into Kostia again. He very much came across as the classic 'troubled youth'. We talked a bit and I received a gift from him! A cassette from the German band 'Enigma'. When talking, a girl came up to us, asking for the time. I showed her my watch (analog), making it clear that it was Moscow time. She didn't seem to be able to tell the time from it but she took my interest with the white rat that was sitting on her shoulder. I asked if I could hold it for a couple of seconds. I could and I took it. When it started gnawing at my fingers though, I accidentally dropped the damn rat!