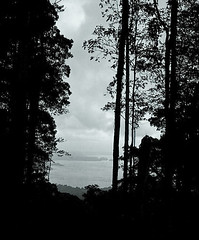 Brownsberg, a hill in the jungle of Suriname with a fantastic view of the Brokopondo artificial lake is actually owned by Suralco, part of Alcoa, an American company which turns Bauxite into aluminum. Bauxite is widely available in Suriname and is important for the war industry. The fact that Alcoa is American and is only concerned with optimizing profits was clear when we were on Brownsberg.
Years ago, in 1970, the mountain and the surrounding area was giving in loan to Stinasu, a Surinamese organisation specialised in eco-tourism. Over the years, the camp on top of the mountain has changed from a couple of bare bones huts where you had to bring your own food and drinks, to a collection of fully equipped houses with a separate building with a bar and basic restaurant. From an enjoyable place to spend a couple of nights, the spot has turned into a great place to stay.
Shortly before we arrived, Suralco had done some test drills on the mountain. With a big truck, they drive into the forest for 20 to 50 meters from one of the roads, squishing everything in sight, to drill into the ground for tens of meters. Officially, they were looking for Bauxite. Strange, since in the 60s, they had done exactly that and concluded there was nothing to find. From one of the employees on Brownsberg, we learned that they were, in fact, looking for gold. If they did find any, chances are that in a couple of years there will be no more Brownsberg since gold is retrieved by simply digging out the whole area.. On our first walk to the Leo- and Irene falls, we came across a pit dug by illegal Brazilian gold diggers. Some three meters wide and 10 meters deep, a dangerous thing to come across at night. The woods are filled up with illegal gold diggers. Although you’re obliged to sell all your gold to the Surinamese state, almost no one actually does that. On the shores of the Brokopondo lake whole communities of gold diggers exist, complete with bars, hotels and brothels.

Related:  The leaning towers of Santos

You arrive at Brownsberg by way of Schiphol, a location in town where busses can take you south. In the past, only jumbos drove down south: large, old trucks from the Netherlands, rigged with windows and seats. Now, most of the vans going south are similar to the regular discobusses that also drive through town. We took one to Brownsweg, at the foot of the mountain, from where we had arranged a lift through Stinasu to take us up the road, avoiding a three hour walk.
We were told to arrive early at Schiphol to get a seat. We arrived at seven, but only left a quarter to nine.
The bus was completely filled up. In every corner and below every seat, bags, containers, boxes and a new car battery were stacked. Two passengers didn’t get a seat and had to sit, with bent backs to avoid the ceiling, on the luggage, during the trip.
At first, the bus didn’t start and the hole where the battery was located was unscrewed, after part of the luggage was taken out of the bus again, which everyone seemed to take in their stride. One guy started to fumble with the battery while a second guy tried to start the car, with no luck. They took out the new battery from under one of the seats and while a third guy held the new battery at an angle, the first one used large metal rods to connect the poles of the batteries while the second tried to start the car again. Again, no results, but this time, when the guy with the rods was about to let go of of the rods and the guy at the ignition tried to start the car one more time, sparks flew all around the bus. So they replaced the rusty brown old battery with the pristine new one and started the car after which they immediately replaced the new with the old battery again.
The first thing the driver did after leaving was to stop at the first gas station. For some food, drinks and a sanitary stop.

Suriname has one highway, the Martin Luther King Highway, or just ‘highway’, which in any western country wouldn’t even deserve the qualification ‘mediocre’. A swiss cheese has less holes in it.
Rather quickly, the highway changes to a bauxite road, going south. Bauxite roads are easily created, you just get a couple of heavy trucks to flatten the road, but they are also easily damaged by wind and rain. The little traffic on the road had to move from left to right constantly to avoid the holes and pitfalls. Luckily, we were spared a flat tyre. If you don’t bring your own tyres, you’re stuck.

On the road to Brownsberg, you pass the factories of Suralco. Employees mostly live close to the facilities in bungalow parks and get a large chunk or their salary in US dollars. The moving of bauxite generally is done in huge trucks. Unfortunately, we didn’t get to see one.