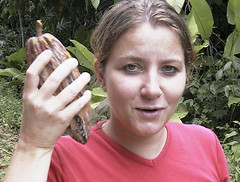 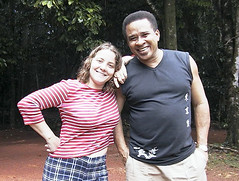 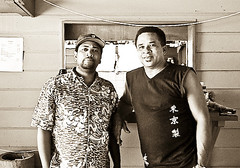 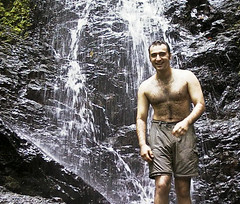 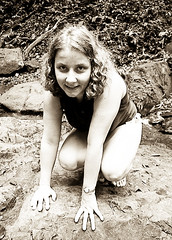 We had decided to relax at Brownsberg. Read a book, drink some beers, enjoy the view of the lake and maybe take a short walk in the woods. It didn’t happen.
Directly after our arrival, we were kidnapped by Sean (‘Seen’) and Ganesh, the guide and cook of two Americans, Bob and Vera, an older couple, and their personal Peruvian birdwatcher. The two guys had already tagged along for ten days and, by now, had gone all but completely mad by the American couple. During the evening, we stopped by to check them out for ourselves and if it wouldn’t have been for me being too tired, I might just have killed either one of them.
After every remark, Vera replied one of the following: “Oh my word!”, “Fantastic!”, “Really?” or “Oh my!”. When we were about to leave, she talked for a second with Betsy:

V: “It was so nice meeting you, I would love to see you again tomorrow!”
B: “But you’re leaving tomorrow morning at six o’clock.”
V: “Oh, that’s right, yeah.”

Sean, as it turned out a childhood friend of Betsy, and Ganesh, taking us along to escape the Americans wasn’t all that remarkable after all. The walk to the waterfalls, however, was. On steep slopes and even steeper stairs we walked down for an hour, after which we had to walk up again for some two hours. Luckily, I guess, we got to see monkeys, snakes and a fist-sized tarantula.
After meeting the Americans, we moved, together with Ganesh and Sean, to a campfire around which two Dutch galls and one Dutch guy were sitting, together with their “slave”, not saying much to another. Sean, who was considering obtaining some fresh meat for the night, took along his guitar to impress his audience. He could have succeeded if the Dutch hadn’t been so grumpy.
Bimbo had come to Suriname on an exchange project for a couple of months and her brother Bozo and a girlfriend Nancy had come over for a short holiday. Most particularly, Bozo and Bimbo seemed to be at odds with the rest, for unspecified reasons. Nancy tried to liven things up by doing a twist in the light of the campfire on one of Sean’s tunes, but to no avail. First Bimbo and shortly after, Bozo grumpily left. Nancy, unsure of what was going on, followed only minutes later.
After sitting at the campfire for hours, not saying anything, they suddenly had found volumes to talk about from inside their hammocks, like little children being away from their parents for the first time and sneakily staying up later than allowed. In fact, they made so much noise that the English couple that was sleeping in the van next to our building, thought that we had gone out drinking with the whole group. Shortly after Nancy left, we all went to bed and I was able to fall asleep quickly. Betsy’s request to the three Dutchmen to be a little bit more quiet didn’t help. They went on for hours.

Related:  Death of a prince

The English couple, Mike and Aly, had bought a van in Chile, in January 2002 and had been traveling around South America since. Now, they had almost come to the end of their trip, with only another four months to go. The second night on Brownsberg, we played Troefcall with them and taught them how to do a tjoerie. According to Sean, you’re not Surinamese if you can’t play Troefcall or can’t do a tjoerie. Troefcall is a fairly simple card game you play with four people. A tjoerie is a disapproving sucking sound you make with your mouth almost closed and your tongue pressed against your upper teeth.
Later, we met Mike and Aly again, in Kourou, in French Guyana.

The cook at Brownsberg, Rocky van Ommeren, turned out to be a good friend of dr. Stolting, an old acquaintance of Betsy who works as a doctor in the state owned hospital in town. Rocky used to be the master chef there for several years. He now only left Brownsberg for a couple of days a month to get the right spices and such, but he was pleasantly surprised by us, according to him, finally some normal tourists. In fact, he was so happy, that he took us on a walking trip the next day. A 15km walking trip. Just like the day before, we basically had no choice and went along. This time we didn’t see many animals either: a kolibri, some monkeys and, hurray, some more tarantulas

It’s difficult not be woken by the shouting of baboons in the early hours of the day. Although the monkeys themselves aren’t big at all, their shouts sound like a big storm that’s raging right next to you. Together with Rocky, we tried to find a group and although we managed to come close, at some point, one of the baboons shouted ‘HO!’ and all was quiet. Later, Rocky told us that as we were driving away from the main camp, together with Mike and Aly, several baboons were hanging in the trees close to the entrance.

Related:  A return to Paramaribo

Other animals we saw were mostly large insects. Huge butterflies, gigantic flies and a big dancing mantis. The mantis was in fact a praying mantis. When I was packing my bag, I noticed the mantis marching towards me but since I didn’t want to step on top of it, I tried to lure it away. I thought I had succeeded but was proven wrong when Mike noticed it was actually camping on my back.
He took it off and placed it on the table in front of him. Immediately, the mantis walked towards me, to the edge of the table. If I did a step to the left, he mirrored my action, if I took a step to the right, he did the same, I started to hold my arms like he did, in a praying fashion and moved my arms to the side, which he would do too, coming slightly closer all the time. I already started to have a vision of me becoming rich by starting a flea circus and already had thought of a name of my mantis: Spargo. Then Spargo jumped of the table, against my head and flew away.