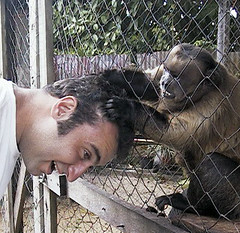 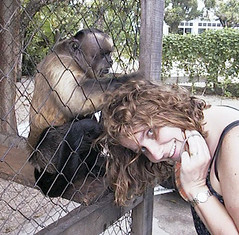 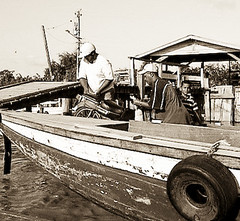 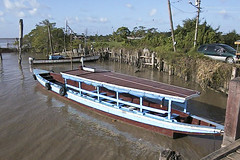 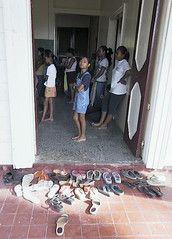 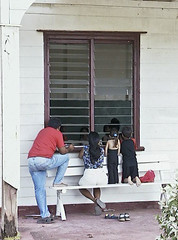 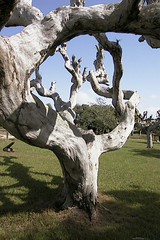 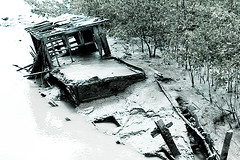 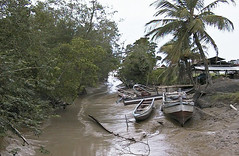 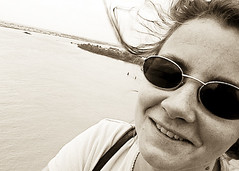 Although it can get quite hot in Suriname, many people have and use bikes. Not just kids going to school, older people too cycle. It's a good alternative to the 'discobusses' that serve as public transport in Paramaribo: Richly adorned vans that take up to 30 people on pre-set routes. Recently, they installed buzzers to alert the driver you wanted to stop. In the past, you had to shout 'Driver, stop!' over the heavy rap and hip hop tunes that many drivers play at full volume.

To check out a different part of the country, we rented bikes at Cardy adventures, who also organize trips inland and rent out apartments. The bikes were quite good, although in Voorburg, from where you can take a boat to Leonsberg, on the Paramaribo side of the Suriname river, part of the gearbox on my bike broke. To not loose the 50 euro deposit, I successfully glued the part back on later, using super glue.

Cardy has a large cage in the yard with a small monkey. Amazed by the attention we gave him, he couldn't stop examining us, to the point going through the hair on our heads, catching lice, I'm sure. Betsy claims he found something on my head which he ate.

Cycling through Commewijne isn't all that spectacular. Although it is enjoyable to master 'Bosjes bridge' (the president that authorized the building of the bridge over the Suriname river was called Wijdenbosch) and some of the plantations are nice, distances are simply too big to really enjoy a leisurely trip in Commewijne.
The only real attraction that's easily reachable is Fort New Amsterdam. The road to the open air museum is sealed off for motorized transport since the Suriname river claimed part of it. Still, by bike it's possible to avoid the 'long-cut' through Tamanredjo.

The bridge over the Suriname river is an impressive 52 meters high. A necessity, since behind the bridge, oil tankers are filled up. The bridge is just a two lane road with a very small pedestrian path on the side which we used as a cycle lane.
When we were almost half way, we noticed a black guy laying motionless on the floor. Grey from dirt, we considered him being dead and lifted our bikes over the railing to avoid using the pedestrian lane he was on. Close to him, I shouted and asked if everything was okay. He opened his eyes and pushed himself up a bit, grabbing his head with his remaining hand, as if he had just awakened from some liquor induced stupor. He looked at me and put up one thumb, "yeah, everything's okay".

When we were looking out over Paramaribo, a Hindustani stopped his car, got out, and threw a dark blue linen bag into the water. Later, we learned from Kamta and Lila that, most likely, the contents of the bag was leftovers from a church service held in his home.

The nicest thing about the 18th century fort is the view you get from one of the higher points inside the area: a great view of the Suriname and Commewijne rivers and the ocean. The fort itself isn't all that great, being rather empty and slightly boring.

When plantations were built along the coast, in the 18th century, the old fort Zeelandia lost its purpose since it was too far off and a new fort had to be built. Not that it served its purpose since twice, in 1799 and in 1804, without any fight, the fort was handed over to the British. In 1907 the area was used as the central government building for Commewijne and later became the only state prison. In 1982, the fort was turned into an open air museum.â€¨If you ever visit the place, don't forget to try and find the keyhole in the treasure box that's stored somewhere on the premises.

Related:  Fort Zeelandia
This text is available under a cc-nc-a license.