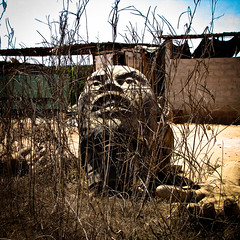 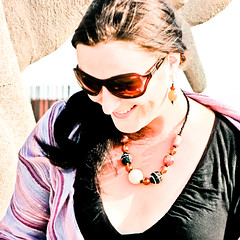 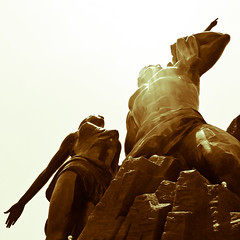 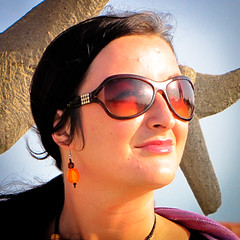 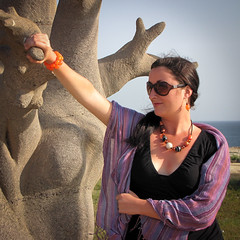 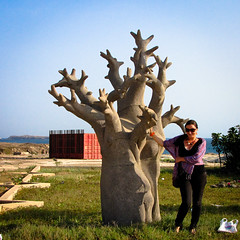 Getting from Banjul to Dakar, overland, is a bit of a hassle, particularly the negotiation surrounding the public transport from the border crossing to Dakar. Though fixed price, the hassle is still such that even locals, traveling from Banjul to Dakar, asked us whether they could team up with us in hiring a shared taxi to minimize the annoyance.
No less than three times did we unpack our luggage from our sept-place, because the agreement on the price was badly communicated back to us, each time the driver's handler trying to squeeze more money from us. This, while what felt like a whole school of children and a horde of grownups were constantly interfering, grabbing at our clothes and bags, shouting what they thought were clarifications and trying to sell mangoes, water and cashew nuts.
In the end, Niamh and I, together with an Italian couple and three Gambians, hired the sept-place at 6000 CFA each, just short of ten euros, plus a bit extra for luggage. in retrospect, perhaps this was offered all along, but the shouting, the use of horrid French, on both sides, and horrid English, on the Senegalese side, and the large crowd constantly intervening, made that what could have been resolved in a minute something that took nearly 45 before we were on the road.

Before driving off to Dakar, we first had to get to the Banjul to Barra ferry, crossing the Gambia river, from where we had to charter a car to the border. At the border, formalities were quite painless, but directly upon crossing, we were besieged by a dozen or so drivers trying to sell us a ride to the nearby bus station. This is a short walk, hence their quick and steep price drop when we started to move in the direction of the gare routiere.

Related:  A thrilla to get in and out of Manila

We arrived in Dakar around four in the afternoon, a good eight hours after leaving our hotel in Banjul. A 30 minute walk to our hotel, we had no more local money after using it up for our journey and the first few ATMs failed, was interrupted by a few well deserved roadside beers, after finally finding a working cash machine.
Dakar's hotels are surprisingly expensive, whether you are staying on the fringes of the city or in town. Our very basic, if decent enough, lodgings at Chez Nizar, though en suite, cost about an average three weeks local wages. And it really doesn't get any cheaper. On the upside, nice and fast Internet from the cafe downstairs.