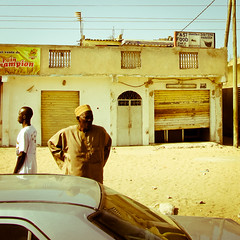 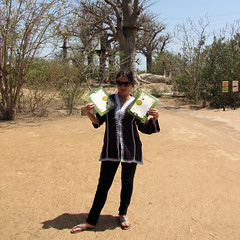 Proud of our achievements

Dakar and it's surroundings can keep you busy for a while, if you have both the time and the money. One attraction, a mere 70km away from downtown Dakar, is Accro Baobab, something of a theme park, where the main attraction is an obstacle course strung between a series of baobab trees some 20 meters off the ground.
Quite a bit of fun, it's also hard to get to. Public transport is rather dodgy in Senegal but we didn't feel like renting a taxi for the day, which sets you back upwards of 50 euros. We got two seats in a 'shared taxi', or 'sept-place', a seven seater, which ply predesignated routes. It took us nearly two hours to get to the park, after which we still had to walk the remaining two kilometers.
The sept-place are useful and reasonably speedy, but if you don't start at a terminus, your chances of grabbing hold of a seat in one of them reduce significantly. Even the small busses that sometimes seem to be everywhere often only leave when completely full, meaning that if you are stuck between two towns, it can be a while before you are picked up.
For us, going back, the pick up didn't take too long, as a nearly empty bus took us in shortly after having walked back to the main road. Unfortunately, the emptiness also meant the bus waited extraordinarily long at intersections and towns along the way, to pick up just that the one or two extra passengers. And with traffic getting onto and off the Dakar peninsula always being a pain, it took us a good three hours before we got back.

Related:  A trip to Cambodia
This text is available under a cc-nc-a license.