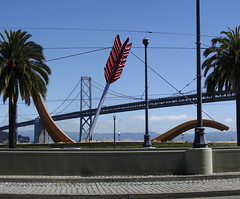 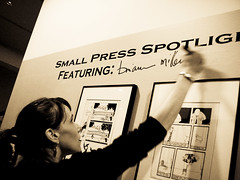 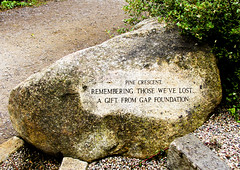 More cycling, checking out the Golden Gate park. Covered in fog, fresh and moist, I stopped by the Japanese Tea Garden, a tourist trap on days you have to pay for getting in, which are four of the seven days a week. The AIDS memorial grove was interesting, as was the Dutch windmill. I didn’t see the bison roaming the grounds.

From Fisherman’s Wharf, where I had rented the bike, I walked to the Rincon center, where a series of large and reasonably pretty murals dominate the hall of the old post office.
Inside, the ‘Rain Column’, a fountain like a small continuous rain cloud, was surrounded by a series of small restaurants where employees were enjoying their lunches. Here’s a few things, food related, which I’ve noticed over the past few days:

+ There are not very many 7-11 supermarkets.
+ McDonalds is only lightly represented.
+ Almost every street corner seems to have a Starbucks.
+ Subway (sandwiches) is all over the place. And they only have two sauces, whereas in Chiang Mai they have eight.
+ Mexican food (and Mexicans) are everywhere.

While in Mexico City, I was disappointed with the lack of Frida Kahlo artwork on display. Little did I know there is a major Frida Kahlo exhibition currently on at the SFMOMA, the San Francisco Museum of Modern Art. (I visited the New York counterpart of the museum seven and a half years ago.)
The museum is good and Kahlo’s exhibition is more than excellent. Besides her famous paintings, quite a few never seen before artworks are also on display.
After these wildly popular internationally renowned works of art, I stopped by the Cartoon Art Museum, where a reception was being held, presenting the works of upcoming comic strip artist Briana Miller. Her self-published works were for sale and good. Very evocative. She regularly produces nice one-panel shorts on her blog.

I finished with a visit to BrainWash, where Tony Sparks was hosting an open mic evening. Comic followed comic, until I realised that most of the crowd was actually either on stage before or going to be on stage later.