Boats waiting on the Shatt al-Arab, on the Iranian side

End of the line

Looking towards Iraq, on the other side of the Shatt al-Arab 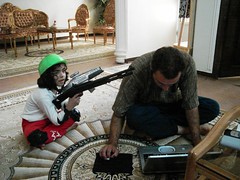 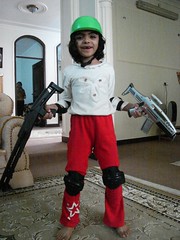 The Basij are getting younger and younger 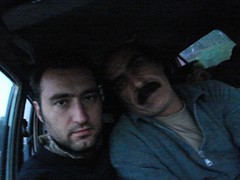 Babak, Parvies, and seven others in the same car 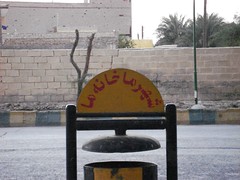 Our city our home 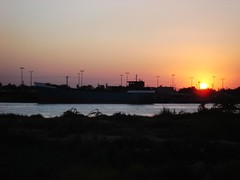 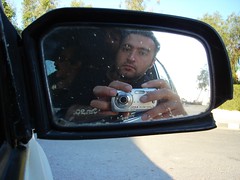 I'm looking at the man in the mirror 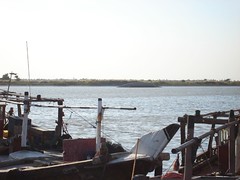 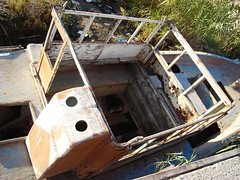 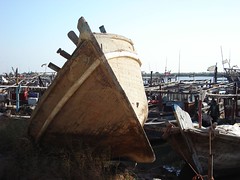 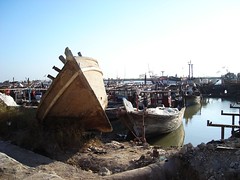 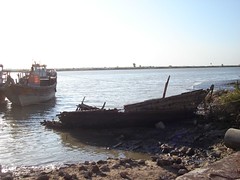 Iraq in the distance 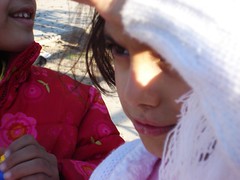 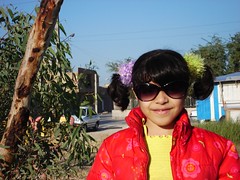 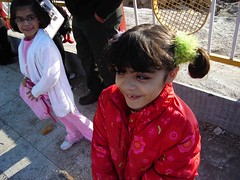 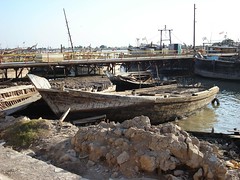 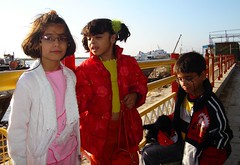 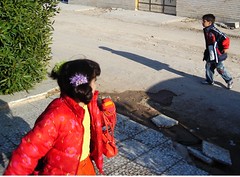 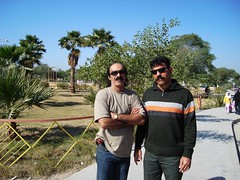 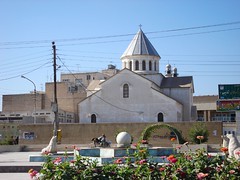 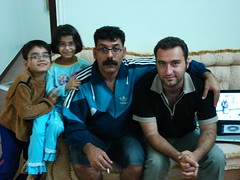 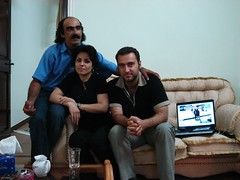 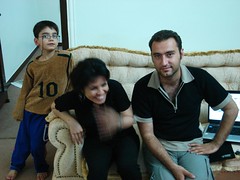 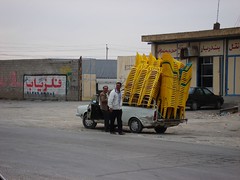 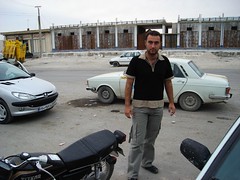 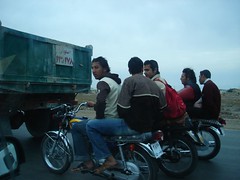 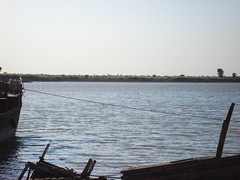 On the other side: Iraq 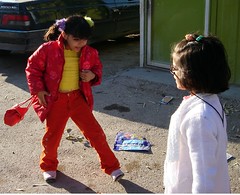 Abadan, on the mouth of the Tigris, is my ‘musha’, my grandparents left Abadan some 45 years ago, just before their last child, Parvies, whom I travelled to from Mashhad, was born. I’ve heard it said that Abadan used to be a beautiful city, but I only half believe that. During the Iran-Iraq war, the city practically became a ghost town, the town seeing the Iraqi opening offensive. It was only this year when the city grew above its pre-war population.
Nevertheless, I’m happy my grandparents left. Really, there’s very little to see in Abadan. There’s a huge refinery which, at least at one time, was the largest in Asia. Built by the Brits, the nearby employee housing is completely out of place in Iran as, with no walls around the individual compounds and the different building style, the bungalows would seem more at home in a remote part of the UK or, indeed, in South Africa or Zimbabwe.

That’s not to say Abadan is unpleasant. In fact, outside the city centre it’s one of the greenest Iranian towns I’ve seen so far and the girls are very attractive, extremely cute. But every free wall space, and then some, is covered in paintings of martyrs from the Iran Iraq war.
I suppose that one needs an explanation. The Iran Iraq war, initiated by Iraq, for the record, was a defining period for modern Iran. Shi’a Muslims have a strong fascination if not admiration for suffering, originating with the martyred emam which defined the schism between Sunni and Shi’a islam (Wikipedia explanation) some 1200 years ago. Shi’as believe the religious leader should be a descendent of Mohammed, while Sunnis don’t think so. In theory, that’s all that separates the two, although over the years many more practical differences have cropped up, not in the least said fascination for martyrs. Some generations after the death of Mohammed, the ultimate battle between the two camps took place, which was hugely in favour of the supporters of the Caliph, the Sunnis. Emam Ali a descendent of Mohammed, was hugely outnumbered and was killed, heroically, of course. For Shi’as, that event was so important that, even now, they revere that man like close to a god. You can not stay in Iran without, every day, seeing multiple images of the man, everywhere. And what’s worse, it’s always a copy of the very same image, even though no one knows what he looked like.
So Ali’s death, because of his beliefs, this martyrdom, became a central value for the Shi’a Muslim faith. In the Iran Iraq war, Khomeini decreed that any Iranian soldier killed in battle would die a martyr, meaning he’d go straight to paradise and be surrounded by hordes of virgins, who’d, strangely, remain a virgin, after every fuck (while, in fact, more recent scholars believe this view to be a mistranslation, these forty virgins actually being forty different types of grapes). Saddam Hussein (who incidentally, during the war, was surrounded by Iranian forces in the city of Khorramshar and quite miraculously escaped, adding to his rather mythical status in Iraq) at first figured he could make use of the rather chaotic situation in this country but didn’t count on a martyr’s appeal and gave up after some eight years.

Anyway, back to the martyr-covered walls. Abadan, so close to the Iraqi border, saw its fair share, and then some, of Iranian martyrs. Most, if not all Iranian cities have a particular place, in town, to remember their war-dead, on walls or posters (and the sections of the cemeteries where these martyrs are buried are generally the most elaborate parts and also the only sections where the graves can go ‘up’). Abadan, meanwhile, has their martyrs on display everywhere.

And Khorramshar? Well, it’s about the same as Abadan, but seems to have less martyrs on the walls.
We visited Khorramshar, and also the river separating Iran and Iraq with everyone from the house we were staying at. In true Iranian style, we fitted no less than NINE PEOPLE in one car.