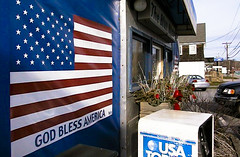 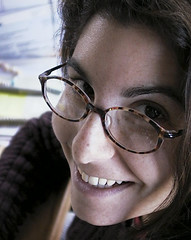 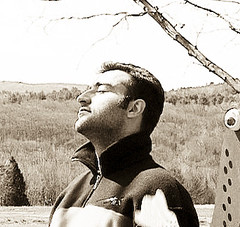 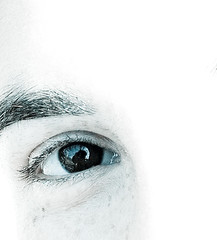 The eye of Stephanie 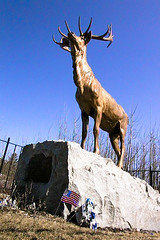 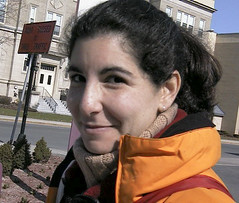 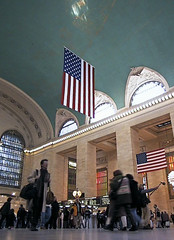 After a very busy week in Holland, I clearly needed the relaxation that I attained during my first weekend of travel, slowly moving in the direction of St. Maarten. Not only did I sleep quite a bit, possibly offending Stephanie for her having to let dinner wait around for a whole two hours after I had fallen asleep on the couch on Saturday, I also didn’t really do much on the three days before starting work at Geekcorps.

I guess I can consider myself lucky for having visited New York before, only a year ago, when I basically saw everything there was to see. The only thing, of course, that was yet uncharted was ground zero, the former location of the WTC towers. I had planned to go there on Saturday, so that I would move to North Adams on Sunday evening but Stephanie convinced me I should come to North Adams on Saturday, mainly because there was some lawn party going on that was supposed to be great. Although we headed for the party, it turned out Stephanie hadn’t brought the address, and we asked several people in the right street if they knew where it was, but without luck. Not that much of a bummer, as it turned out; when we got home, Steph went for a nap and I fell asleep on the couch, waking up some four hours later. Two hours after Stephanie had prepared dinner.

Still, in NYC, I was able to see the lights shining from ground zero, replacing the WTC towers, from afar. I have to say that, although I’m generally not very impressed with American sentimentalism, this “monument” seemed quite appropriate, two large beams of light shining very high into the night sky. The two lights also played a trick on the eyes: although the lights shine straight up, looking up, it seemed as if they were shining at an angle, coming towards the viewer.

Saturday morning I mostly spent enjoying breakfast. Two eggs with spinach and feta, home fries, toast, orange juice and a puddle of coffee. The hostel I first had wanted to stay at, the same I had staid at a year before, didn’t have free beds, and I had to call around quite a bit to find me a new place to stay. I ended up on 145th street, a major 60 streets to the north of the other hostel, right in the middle of Harlem. The good part was that although the first hostel was packed, the room I got in the second was able to accommodate 12 people with only two beds used.â€¨Breakfast at the “Two Star” was good. Not in the least because of the people that frequented the place. If you’ve ever seen a Spike Lee movie, you basically know how it goes. Mostly black guys, although the place was run by Hispanics, frequenting the coffee house; “Hey man, haya doin'”, “Yadaman”, etc. Great to watch.

Something that I already noticed the night before struck me again as odd: Apparently, the US’ higher degree of individualism, as compared to Europe, seems to make for badly dressed people. Many people seem to want to set themselves apart from the crowd and resort to really awful clothes; not just baggy pants, but big sacks. Not just low hanging trousers, but trousers with seemingly no existing legs; terribly dressed hair, piercings in the weirdest places, caps on teeth and more.
On Sunday, I got another feel of this heightened individualism, when I went to the video store with Stephanie to pick up a movie. She went on to the gym, to workout for an hour, I went back home to start on dinner, jacket potatoes. Steph thought the potatoes needed to be in the oven for half an hour or so, I figured they needed to be heated for at least an hour. At some point, she mentioned that I could start early with dinner if I really wanted to and I almost snorted that I could never do that and should wait for her. “Oh, you’re so sweet!” Is it me, or is this just plain decency?

Friday night I had met Kerri Mahoney, although only for 15 minutes or so. Kerri was on the third group of geeks, where I was on the second. We were going to have a couple of beers together, but it didn’t totally work out. We had about half a beer bacause she had a dinner date somewhere else. Still, it was quite a bit of fun and I didn’t really mind anyway, since I was dead tired.
When I walked back to the right subway station, I came across a coffee house selling Bulgin’ waffles, probably a reference to Belgian waffles. I went in and ordered a coffee and a really good blueberry muffin, almost immediately hearing a group of Dutch guys sitting in the corner. On a regular day, I would probably have gone up and talked to them. Now, I was so tired I really didn’t feel like it. Even when one of the guys came up to me and asked if he could use The Times that someone had left on my table, I didn’t let it show I was Dutch. Still, it was a lost cause since my sweater, telling the world in larger then life letters I was from the Technical University of Delft, gave it all away. When I went to the bathroom, one guy from the group asked me how it was that I was wearing such a sweater. We started talking and it turned out that they had just come from Boston, where they had staid with a friend. A guy that lived in Brussels when I lived there, who’s from my university and whom was in the same student organization as I was. A small world indeed.

Related:  Takhi
This text is available under a cc-nc-a license.