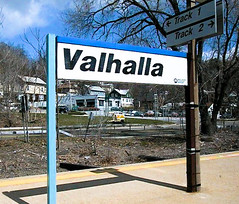 Last year, when the four geeks of us took a train from New York in the direction of North Adams, we were on an AMTRAK train. Although comfortable and quite fast, the ticket was an obnoxious $70 and we still needed to be picked up and driven to North Adams, some 75 minutes away. This time, Stephanie had found a better deal; the MTA (the Metropolitan transport authority) is operating a commuter line to Wassaic, “just” 90 minutes away by car from North Adams. The ticket, however, is a cool $9.50. I took the Wassaic line.
This weekend, the clocks in the US were put forward to allow for summer time, a week later as compared to Europe. It turned out that, on Saturday afternoon, some clocks had already been put an hour forward. Since I don’t wear a watch, I turned out to be at Grand Central Station an hour earlier then I thought. Because of that, I also could take a train a whole 90 minutes earlier than I had originally planned. I figured I would be able to wait and read a bit at some coffee house or bar that most surely would be available in Wassaic. Wrong. As commuter lines go, most of the train stations along the way were in the middle of nowhere, a platform in the forests, next to a highway and a large parking lot.
In Wassaic, I tried calling Stephanie but for some strange reason, I had to insert a weird $5+ for a call that cost me less then a buck when I was in NYC. Luckily, there was a heated waiting room available on the platform. I waited.

I was surprised, and a bit agitated, by the many flags that I saw hanging around when moving north from NYC. They literally were everywhere. Many houses had them, street corners, train stops, etc. Main Street in North Adams turned out to be littered with them. It is weird to see a people that is, seemingly, so proud of its own country, and therefore its own diversity, but can not deal with the diversity outside of its own country, where it has to enforce its own identity and wishes onto the cultures of others. To me, this showing of flags is like a bookmark for the ignorance of Americans.