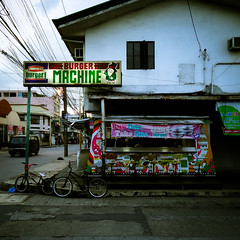 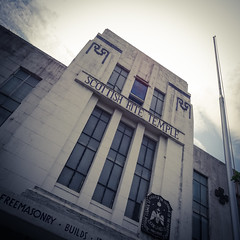 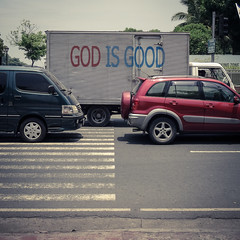 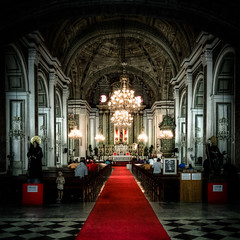 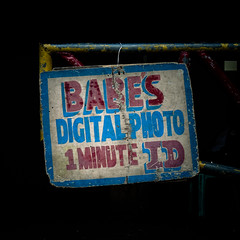 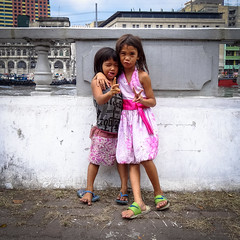 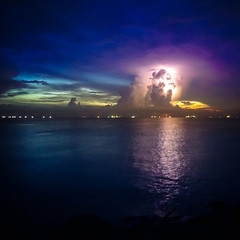 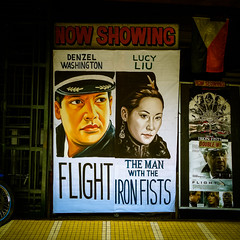 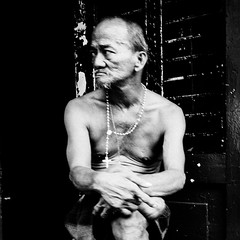 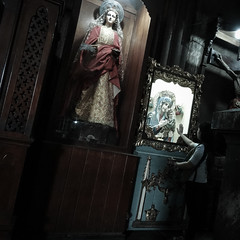 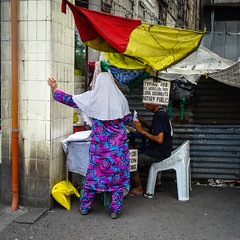 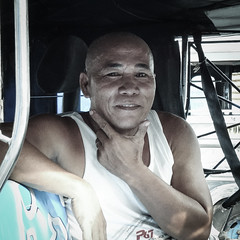 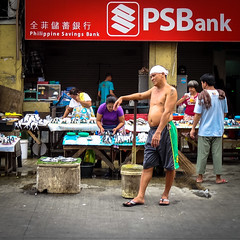 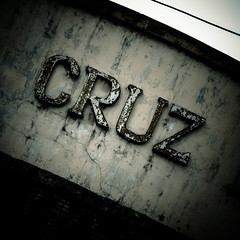 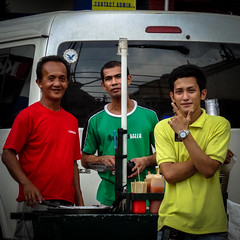 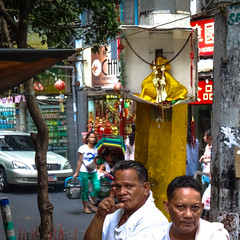 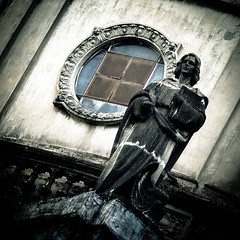 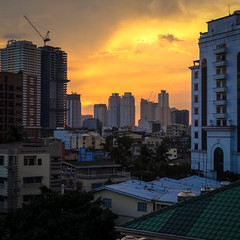 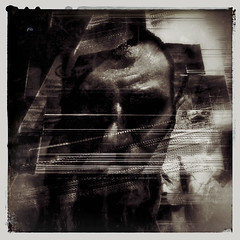 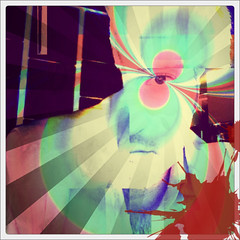 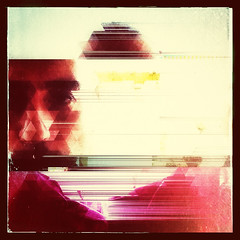 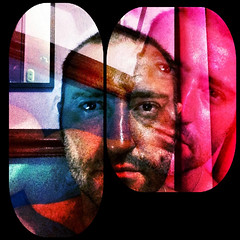 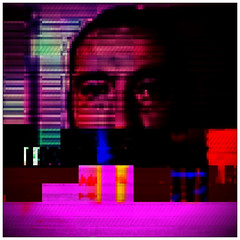 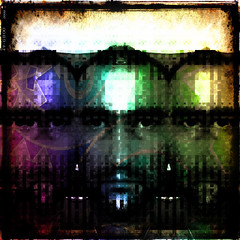 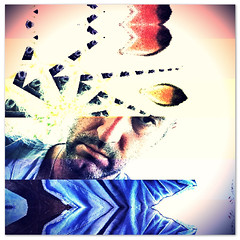 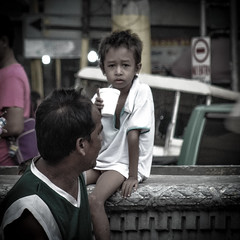 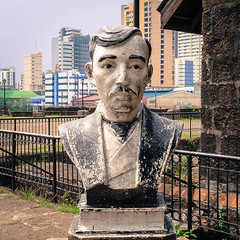 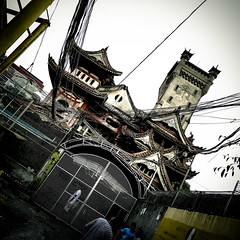 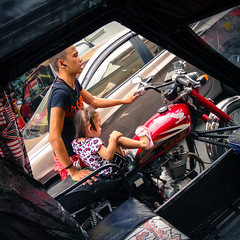 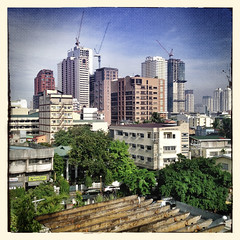 Apparently, there is no easy way to get out of Manila’s main international airport. Asking several staff, the only suggested option was taking a cab, something I typically try to avoid, specifically when leaving airports.
I probably was messed over, though there was no real way I could have avoided it. I took an official cab and paid the metered price. At 14 euros for just over 8km, it was an annoyingly expensive ride.
But it could have been worse. Though the ride apparently should have cost 5 or 6 euros, another less lucky fellow was charged 30.

Manila appears a quite pleasant city, not too different from Bangkok, if perhaps more laid back. Certainly affordable, people are friendly, while a vast majority speaks English. Not nearly as humid as Singapore, while public spaces are policed in quite similar fashion as compared to the city state. But, thankfully, the Philippines are not a police state.
Here and there, impressive but fading architecture hides between city blocks bustling with energy, 7/11 supermarkets, and a host of national and international fast food chains.

Buying a drink from a hole in the wall, I was welcomed with a “What’s yours”?

The worst reachable airport in the world

Depending on your terminal and arrival time, Manila’s main airport can already be quite the hassle, though it appears that taxis don’t have a tendency to rip you off when going there. Though this mostly might simply be due to most drivers being fairly honest, while the dishonest ones congregate at the airport, as they servicing the airport can be like structurally hitting the jackpot.

But the worst is left for Clark international airport. In true budget airline style, this one is claimed to be Manila’s second international airport, even though its nearly 100 kilometers away from town. AirAsia and a few other budget airlines fly from here, but none offer an even somewhat easy connection between the airport and the city.
There is one bus company which links up Manila with Clark directly. But, when I showed up at their sales counter, 4.5 hours before my flight’s scheduled departure time and an hour before the bus was supposed to leave, I was told I should instead use another bus company which served the nearby town, reputedly, hourly. The clerk feared that their bus would not have enough time to clear Manila traffic and get to the airport in time for me to reach my flight.

Off I trundled, in search for another bus terminal.

Already finding the first terminal was a bit of trouble. The bus company doesn’t specify on their website where it is, only mentioning the suburb. So, I asked the ladies at my hostel, who had a knack for not letting me finish my sentences.

“So, I’m going to Clark airport tomorrow. And I understand that Philtranco runs a shuttle between Manila and Clark.”
“Yes?”
“They claim their bus leaves from MegaMall and Pasay, and…”
“MegaMall is very far. Take Pasay.”
“Yes, well, I know where MegaMall is, but I don’t know where in Pasay…”
“Pasau is right here, very easy.”
“Yes, well, I will still have to know where in Pasay I will have to take the bus…”
“Pasau is right here, is very easy. You just go.”
“Just go… Where?
“To Pasay. You need to take bus from Pasay, yes?
“Do *you* know where I might be able to find the bus terminal in Pasay?”
“You just go and ask. Everyone will know. Then you take jeepney.” A jeepney being someone of a shared taxi, almost identical to the Thai songthaew.

Related:  Esfahan: half the world

Finding the right terminal and starting at the south side of town, it took an hour just to get to the north side of Manila, which I could have reached in 10 minutes by metro, instead of the 2 hours it had taken now.
At the Dau bus terminal, Day being the town fairly close to Clark, but still perhaps 10 kilometers from the airport, time was starting to run out, there were no taxis in evidence. Absurd, but confirmed by several of the workers at the bus station. I could take a jeepney, waiting for it to fill up, or rent the whole jeepney, which seats a dozen or so, myself. Or I could take a motorbike taxi to the ‘Main gate’. I opted for the latter.
The ‘Main gate’ turned out to be the town’s short distance bus station, perhaps still some 6 or 7 kilometers from the airport. Here, I still had to take a jeepney, renting the whole thing with three fellow passengers just to get us going.

I eventually arrived just under an hour before my scheduled departure, covering the 95 kilometers from hostel to airport in just under 4 hours and 15 minutes.

Then, adding insult to injury, i was charged a 9 euro ‘Teminal tax’ upon departure.

Clark was, until 1991, the largest American air base outside of the US, the States having played a somewhat unsavory role in Philippine politics before then. The airport was refurbished and reopened as the capital’s second international airport two years later.