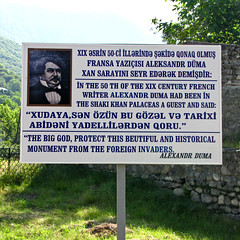 In the garden of the Khan's palace 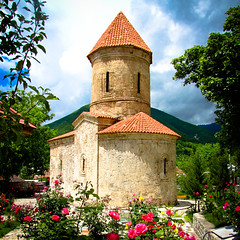 The Albanian church in Kish 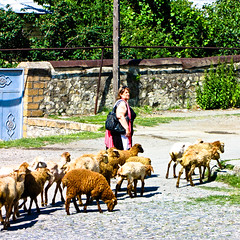 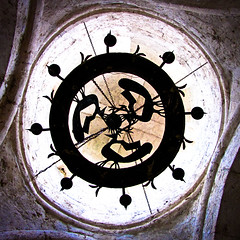 Three sides to every story 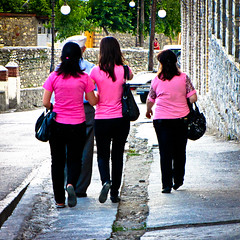 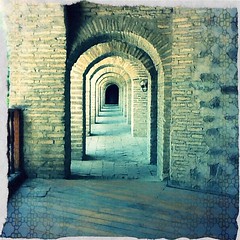 Chilling before dinner in #sheki 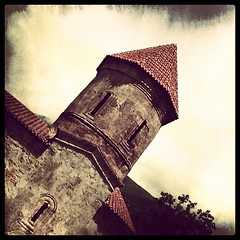 That was almost a #pilgrimage to get to this #church in #kish, next to #sheki 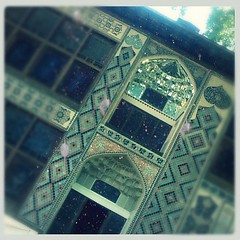 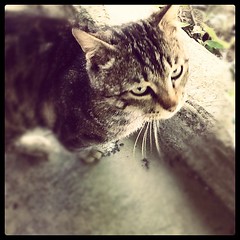 Azerbaijan is a pretty country and there’s lots to see. But it’s also not the easiest country to get around in, unless you’ve got your own transport. Sheki, in the far north west, sometimes written Shaki, is worth visiting, but not too easy to get to. Busses take a reported 7 hours, my train took 11, but as that was an overnight, nearly empty, sleeper, for a mere 9 euros, the trip was very pleasent.
Still, Sheki train station is a baffling 17km from the town of Sheki, meaning you have to pony up an additional 3 euros for, and deal with the hassle of, a shared taxi to drive you to your hotel.

Sheki is in the foothills of the Caucasus. Surrounded by green pillows of mountains, with the snow-capped Caucasus as a backdrop and looking out over green plains, Sheki is most certainly picturesque. Also, the old town is in the process of getting a complete makover, in the wake of Baku’s refurbishment, meaning that in one or two years, Sheki will be one hot and gorgeous tourist destination.

Besides the nice surroundings, perhaps the biggest draw is the Caucasian Albanian church in Kish, a few kilometers north of Sheki. ‘Albanian’ in this context, has no connection with the country Albania on the Adriatic sea. The former’s name is derived from the name surrounding kingdoms used to denote the area in the Caucasus, whereas the name of the latter most likely derives from the name of a settlement on the Adriatic coast in modern day Albania. An etymological coincidence.

Legend has it that, already in the first century AD, a disciple of a disciple of Christ founded a church in Kish. Recent findings make this unlikely, but what has been shown is that the church was built on an ancient cultic site and has been a center of worship for millenia.

These findings were a result of a cooperation between Norway and Azerbaijan, where one of the researches was the late, great, Thor Heyerdahl. At some point in his illustrous career, he compared rock paintings from Gobustan, close to Baku, depicting boats made from reeds, with similar boats from his own Norway and started wondering.
Then, Odin was, in most contexts, the supreme god of the Norse pantheon, the Aesir. People from Azerbaijan call themselves Azeri. Aesir, Azeri. OMG!
Heyerdahl claimed that the Odin myth stated that Odin led his people from east of the Black sea to Scandinavia. I can’t find corroboration of this, except an obscure reference in a book on Google booksearch, but even if this is indeed true, it sounds more like Vikings adopted a foreign pantheon than that people actually migrated and founded Norway.

Interesting, certainly, but without somewhat stronger evidence, this makes Heyerdahl almost look like von Daeniken. Then again, Vikings coming down to the Caucasus for raids and maids is pretty much an accepted fact, as is shown in this image.

Either way, Sheki is worth a visit. The place to stay at is the gorgeous Karvansarai. At least until they open the completely refurbished and even bigger karvansarai just to the west of the curren tone. Dinner is to be had at Celebi Xan (which means, weirdly, that Jackie Selebi has a Turkic name). Their sheep-tail-fat kebab is pretty darn good. But bewar that it is… pure, and only, fat.