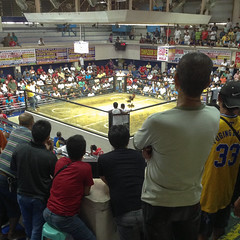 You can't go to the Philippines and not check out a cock fight.

Appropriately, bouts are staged in cockpits, where the quite brutal duels are executed in quick succession. However, it's not the duels themselves that impress, or disgust for that matter. Considering how horribly the vast majority of fowl and livestock is abused in commercial institutions in the west, two roosters going at it with a knife tied to one of their legs is terribly tame, and of an inconsequential scale, in comparison.
What is overwhelming, almost threatening, is the tornado of betting odds that all spectators shout around, wildly gesticulating to indicate which of the two cocks they are taking bets for and at what rate. From a quiet, mellow, lounging crowd, within sconds of the cocks starting to ready up, showing their relative strengths, the pit erupts in an ear shattering, pulsating madness of shouts and movement, almost all men (and only men) wildly gesticulating across the room.
Then, after the cocks have been let loose, but only when the first attacks start, does the madness die down.

At the start of a bout, the cocks are carried into the ring, with the knifes, attached to the backs of their left claws, sheathed. Most often, each cock's minder is accompanied by a second minder carrying a second cock, used to antagonize the fighter by forcefully pushing the two on top of each other, allowing them to poke their beaks at each other, in the hope the heightened adrenaline levels will aid the fighter in overcoming his adversary. It made me think of fluffers during porn shoots.
Then, the fighters are carried to the center of the pit, the knives are unsheathed, for a few seconds, the cocks are allowed to peck at each other, still being held by their minders, before they are released.

To, often enough, peck away at imaginary corn seeds on the floor of the pit.

But only for a few seconds, after which they go at each other with extreme aggression, flaring the feathers around their necks. Jumping up in the air, pushing their claws forward, with the intention to rip open their opponent with their robocop-like addition.
Fights are over in seconds rather than minutes. One of the cocks will be cut badly, sinking down on the ground, unable to move or simply dead. Occasionally, the cocks might have their feathers or legs intertwined, requiring the referee to pick them up by the necks, after which he'll bounce one or both up and down, to test whether they can still stand on their own legs. If not, he'll drop the incapacitated one and declare the other the winner.
Settling the bets, money is then thrown around in crumpled up packets from one loser to winner, or from loser to middleman.

The cockpit is a surprisingly open affair, the stadium more resembling a boxing rink, with the actual pit elevated, surrounded by a glass fence. In the corners of the pit, little glass cubicles allow the minders, who stay in the rink during the fight, to hide for cover, if needed.
Natural light streams in through the roof.

Above the ring, two square boxes indicate the two sides at play. "Meron", meaning "they have", and "Wala", meaning "nothing". For many of the games, the "Meron" box is lit up, meaning that side has the advantage, influencing the bets and payouts for the spectators. Back in the day, no such signage existed, and a sombrero was used, handed out to the financer of the cock with the advantage. One side would have the sombrero on their head, the other would have nothing.

The betting, if overpowering when happening around you, appears surprisingly egalitarian. Everyone is their own man, the floor is open to all. However, the low tech nature of the betting, the shouting and gesticulating, could easily be replaced by a tiny bit of tech, a simple smartphone app, say, syncing odds and amounts through a central server, which would allow for peace and quiet and, more importantly, much more money changing hands.

Strangely, there appear to be no fights on Saturdays, while on Sundays, the fights start as early as 8am. On my way to the cockpit, getting closer, I saw more and more owners traveling and arriving, mostly by motorbike taxi or trishaw, with their cocks in specially prepared, tough, but airy, cardboard boxes.
The walls of the cockpit, both inside and out, are covered with large canvasses announcing big upcoming events, with 2000 euro entry fees and 1000 euros minimum bets. These numbers apply to the financiers, the owners of the cocks, whose playing and betting is completely separate from the bets that are taken outside of the ring.
For prize money, the fastest kill is rewarded handsomely, but so is, typicallyt and strangely, the fifth fastest kill and, at some bouts, the 9th fastest kill.
Slow starters, with the slowest kill, get a consolation prize.

During my visit, one of the fights resulted in a tie, both cocks incapacitated, generating lots of surprised commotion from the crowd. Fights are ended after 10 minutes with no winner, which also happened once during my visit.

Sadly, taking photos was not allowed, even though everything was filmed by some guy, a few small steps up from an amateur. The feed was shown at something of a waiting/catering area, where owners and financers hang out with their cocks, awaiting their turns. I was told to keep my camera in my bag. But, there's the iPad, even though, in the far corner of the stadium, I still was quickly spotted.