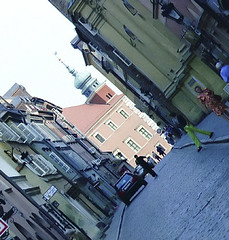 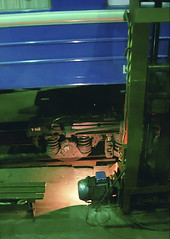 The train arrived in Warsaw at the ungodly hour of 6:40am. Earliest at 8am could I get in the LOT office for changing my plane ticket to leave the same or next day, so nothing to do but wait. Luckily, the weather was much better the it was when I was in Warsaw the previous time, so it wasn't too bad.

I wanted to try to meet up with a friend of mine, someone who I knew from working for Procter & Gamble so my first choice was flying out the next day. I could and went in search for a hostel. I found one (the only one that still had room left) quite far away from the city center, that also had a curfew at 11am. Pretty bad, but at least a place to sleep. In addition, it wasn't possible to enter your room between 10am and 5pm. So, when I arrived at 10:15, I was told I couldn't even get a shower anymore (and I hadn't showered for some three days!). Some persuasion actually got me a shower, although halfway only cold water started coming down. Another boy who came after me to take a shower had to shower with cold water only.

I also succeeded in meeting up with Robert, my P&G buddy. We had a great evening, although I had to leave early. We drank a lot in an Irish pub, where a young woman gave me her address so that I could call her next time I was in Warsaw, for a tour of the city…

During the day, I toured most of the city and I was surprised at the many young international people that were visiting the city. I got the idea that for these young people, Warsaw was now an acceptable destination within the Interrail package that, so obviously, most of them were using. Strangely, though, many of the foreigners were Italian. Maybe because Italy – Poland is about the farthest trip they can make with Interrail.

Related:  Sightseeing in Herat
This text is available under a cc-nc-a license.