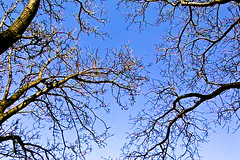 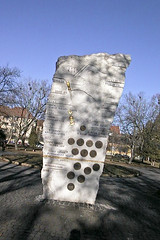 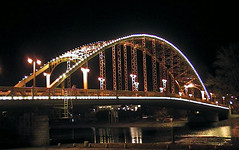 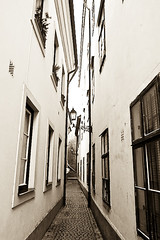 Having some time to myself on the train from Vienna to Hungary, I was able to read up a bit on Croatia, Slovenia and Yugoslavia. A welcome change, since my walking around all day with a heavy backpack in Vienna had given me muscle cramps in my buttocks.
I was surprised at the apparent pricing level in Croatia, Slovenia and Yugoslavia. Expecting Eastern European levels, they seemed to have caught up with Western Europe at least in one expect: Their prices.

While countless modern windmills dotted the landscape between Vienna and Gyor, a friendly Hungarian border guard asked for my documents, typing the information obtained into an old IBM thinkpad. When he saw the picture in my passport, he looked at the picture, looked at me, looked at the picture again, at me, shook his head and grunted disapprovingly.
Asking if I had another document, I went through the other papers in my wallet but all had the same photograph. All, except a discount card for train travel in the Netherlands, which bore a photo that resembled me even less. Still, the guard seemed to be satisfied and we started chatting a bit.
Something I should have done earlier since when he learned I'd lived in Magyarorszag for a year, he was all smiles and when, after a couple of minutes, he had to continue on his rounds, said goodbye in typical Hungarian fashion: 'Hello!'.

According to the Planet, Gyor is much less touristy than Sopron, another Hungarian border town but one I had once spent a night in after hitchhiking back to Hungary from Holland. When I was in Sopron, it was a small town, basically nothing more than a clustered group of cozy houses surrounding an old town square, radiating peace and quiet.
Now, in Gyor, all restaurants carried bilingual menus and bars, like the 'Kazamata', carry hour-long sets of modern triphop of mixed Hungarian hits from five years ago. Not sure if I wanted to see what, if this meant 'less touristy', Sopron had become, I suppose this had to be the price for a bit of development and being so close to the Austrian border.

Related:  The slow boat to Belem

Then again, maybe things weren't so bad. The Planet's information on Gyor was on to par with the information it carries on most Russian cities in its Russia guide: The map wasn't right, streets don't exist or have different names and many of the cafes and restaurants either don't exist or are located in a totally different location.
Expecting to have to pay through the nose for a place to stay or a bite to eat, I was surprised that both the hotel and the restaurant I ate at were still very affordable.

Gyor is a nice little town. The downtown area, probably with the hordes of tourists in mind that seemingly flock here every year, has been changed into a pedestrian area and is littered with cafes, outside seating areas, restaurants and a huge Kaiser supermarket.
Many of the buildings are actually museums or have been designated as historical monuments. Surprisingly, many of the houses just outside of the city center reminded me of the houses I'd seen all over Siberia, albeit here they were made of concrete, not of wood: Mostly one, sometimes two stories, dark-brown walls with lighter-colored and ornamented woodwork around the blinded windows.

Just outside of the center, there's a big green area from where, in six directions, streets fan out. In the middle of the square, there's a huge monument, commemorating the 1000 year history of Hungary, erected in the year 2000, which is surprising since Hungarians consider the year 896 as the beginning of their nation. That was why, in 1996, when I was living in Budapest, the country celebrated its 1100th birthday.

Thankfully, the hotel I was staying at hadn't upgraded to western standards yet. Right next to the train station, within audible distance of the high pitched signals denoting trains leaving and with floorladies on every floor, the shower area (shared!) had some 5 showers with no shower curtains and a big 'Feijenoord against racism' sticker above the entrance door.
In Matroz ('sailor', Hungarian fishing words lean heavily on Dutch originals), I had a pleasant re-acquaintance with the Hungarian kitchen and, of course, I ordered much more than I was able to eat. The food, including the big mug of beer allowed for the owner of the restaurant to roll me out of his place like a small barrel of wine. But the halusky, pasta with goats cheese, lard and huge amounts of cream was worth it.
Only one of the 15 or so patrons in Matroz was Hungarian. An old, wrinkled man who ate soup with huge but trembling hands and cleaned his mouth after every spoonful with the tissue that lay right next to his tray.