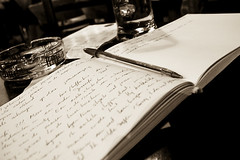 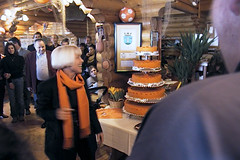 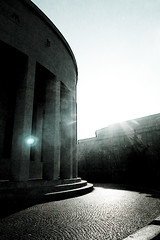 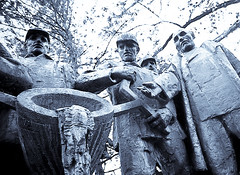 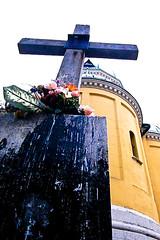 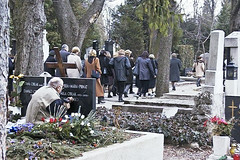 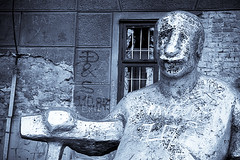 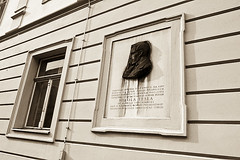 The home of Nikola Tesla 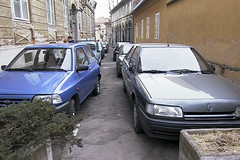 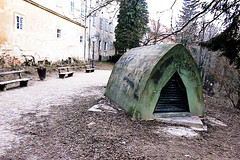 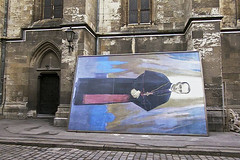 Pastor on the side 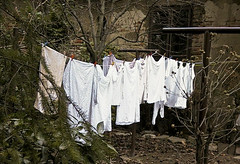 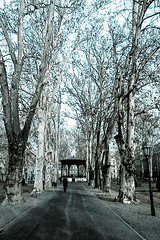 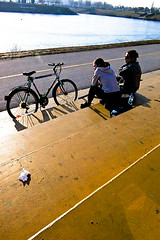 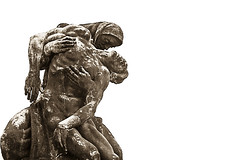 Grabbing him by the titties 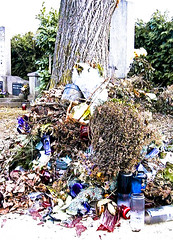 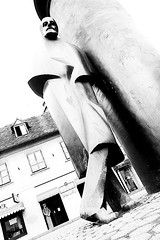 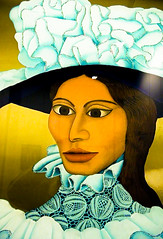 After I had gotten my ticket onward, I found me a place on Deak Ter and waited for time to flow by, enjoying the warm winter sun. A boy and a girl, were flirting with each other right in the middle of square, as were their two dogs. However, the dogs went at it at slightly a more aggressive pace and had to be pulled apart when one started to mount the other. Quickly, they left together.

The one-way ticket to Zagreb turned out be more expensive then I hoped, although much cheaper than tickets to either Ljubljana or Belgrade. I would have been willing to pay for the ticket to Belgrade, but on top of the ticket, I would also have had to buy a visa, which could have cost me as much as 50 euros. Then, there would have been the issue of finding a place to stay.
At some point, Belgrade used to have three hostels. Of these three, the phone number of only one was still working. I called and asked for the price of a bed. "79 euros", per night. The hostel had changed into a four star hotel…

I hadn't checked if the Zagreb hostel would have beds available, which made me feel a little bit uneasy, arriving just before midnight. In the capital of a country where not so long ago people were still fighting for control of the area. But my uneasiness turned out to be uncalled for. The room at the hostel was as expensive as two hamburgers and I had six beds to choose from.
The second night, the five other beds were occupied too. A big black guy, a Chinese student writing a paper on post-war Bosnia and Croatia, an Ozzie ('Since I travel so much, it's difficult to still get excited about something.') and an unexciting couple from France.
What surprised me was that the bars and restaurants closed so early. When I arrived, I had barely time to grab a hamburger before everything closed at 12 and realize that, indeed, the hostel bed was twice the price of the hamburger.

Initially, the desk clerk at the hostel appeared to be nothing but a growling old bear, but after I checked in, he metamorphosed into a chatty, perfectly friendly old man. He couldn't stop talking about his hometown on the coast, Croatia's national parks and the women, oh, the women.
Croatian women, as far as I had seen them so far, didn't seem overly attractive to me. They seem to be rather small, neither nimble nor quick, with grooved faces that looked prematurely old. Great for portrait photography, less for amour.

Interestingly, a Dutch guy told me two days later that Croatians believe they descend from the ancient Persians. The Persian king Darius already mentions the Croatians in one of his writings as a people originating from the borders of present day Iran and Afghanistan. The oldest mentioning of the name 'Horvatos' (the Croatian name for the Croatians), dates from the year 200 and was discovered in a town close to the sea of Azov. Croatian national emblem with the red and white blocked shield supposedly dates from the time when the Persians used colors to denote directions (hence the Red, Black and other seas).

The next day, strolling around town, I noticed that the people very much like to look like Italians. The ladies with difficult expressions on their faces, large sun glasses, black hair, black long coats and black gloves. Although the men seemed to be less inspired by Italian fashion statements.

On the train from Budapest, I chatted with Marnie and Francois, an Irish girl and a French youngster. Marnie was on her way to Venice, Francois had to get back to France for some reason.
I was surprised by Francois, who had traveled all over the world, by him being very negative about anything but France. But then again, I suppose that comes with the territory. Marnie surprised me by her not having a clue on the countries she'd been on or the ones she was going to. She had thrown away her guidebooks, didn't speak anything but English and had no clue what to see or do in Venice. "A tourist doesn't know where he is, a traveler doesn't know where he's going". She definitely knew where she was going…

Zagreb reminded me of a smaller, quieter version of Budapest or Vienna.

Beneath the train station, there's a small shopping center where I had a hamburger and a beer just before crashing on my first night in town.
In the tiny bar where I had the beer, I had the company of a huge crying Croat, a hooker, her pimp and a friend of his. Small signs on each table notified me that 'no smoking is forbidden'. I wanted a beer. Croatian beers only came in half-liter jars. No problem.

Croatia, not part of Euroland, uses the Kuna, a replacement of the Dinar since May 1994. The name 'Kuna' derives from the Croatian for 'weasel', its skin being used as a form of currency during the dark ages. The Kuna was tied to and modeled on the D-Mark. At first glance, the Kuna notes look like Mark notes.

Every day at 12 noon, a canon is fired from the Lotrscak tower. When I was walking through the town on my second day in Zagreb, I knew this, but when I saw an older man with what seemed to be his grandson looking and pointing up, right next to the tower, I didn't realize what was happening. I looked up and right then, the canon was fired, with a thundering boom, leaving only a smoking nuzzle to look at for me.

Seldom do I believe the qualitative statements from Lonely Planet. Since these guides are prepared months before publication and sometimes years before one reads them, they seldom can be completely accurate. Still, I did try out 'the best hot chocolate in Zagreb' in the Tolkien mansion.
I mainly wanted to see the house, also because I was going to see the Lord of the Rings that very night. Not only was the mansion worth visiting, the hot chocolate was fabulous; almost as thick as pudding, steaming hot, with added rum and a thick blob of whipped cream.

For some reason, graves and grave monuments tend to be more impressive in this part of Europe. That, combined with the communist love of bigger equaling better have instilled in me something of a fetishism for graveyards. I had to see Zagreb's, 'Mirogoj'.
The whole length of the graveyard is protected by a wall that looks more like an Indian fort than a central European memorial, but the graveyard itself is not as impressive as I hoped, although the war graves were sobering due to their simplicity: six small grassy fields with, on one side, a stone slab inscribed with the names of people for whom the memorials had been raised and then, on these fields, three randomly placed crosses.

Not every day, or for that matter every decade, is there a royal wedding within the Dutch royal family. And of course, during the first one in 40 years, I had to be abroad. Still, I was able to join the party, organized by the Dutch embassy in Croatia.

I had already been to the embassy to pick up an invitation and now I had to take a tram to the edge of the city, walk for 20 more minutes, all to arrive at a small lake used for rowing contests where, on its edge, stood a log cabin with several Dutch flags beckoning me to come closer.
'Speculaas', Dutch cheeses, cakes and more were passed around and when Wim-Lex finally kissed Maxima, people seriously started to cheer and some minutes after that, the Dutch ambassador started cutting up a huge orange multi-storied cake.

The group of visitors was an interesting cross-section of Dutchees in the Balkans: Embassy personnel, NGO representatives, SFOR soldiers and general adventurers, the most interesting couple being two men working for a trauma team supporting people traumatized by the war in Yugoslavia and people that were traumatized by supporting people that were traumatized by the war. Mostly, they were active in and around Osijek, in the north eastern corner of Croatia, an area still littered with land mines.