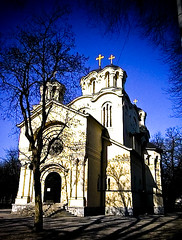 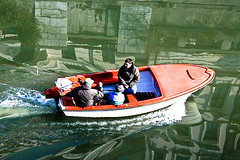 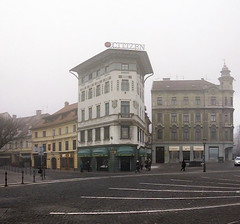 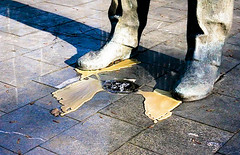 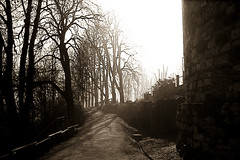 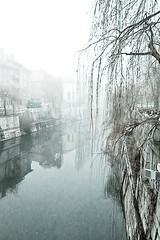 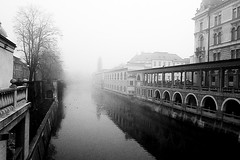 A tiny and quiet river, the Ljubljanica, flows through downtown Ljubljana, a city filled to the brim with art-nouveau and neo-gothic architecture, all on a scale several sizes smaller than in Vienna or Budapest. From a big castle, perched on the top of a hill right in the middle of the city, it's possible to overlook the whole town.
Downtown Ljubljana appears to have more bars and restaurants than inhabitants, although its 300.000 citizens still manage to get each and every place packed. Every street, every nook and every cranny radiates energy.

Slovenes dress well, as if they just walked out of a H&M, D&G or Vidal Sasoon commercial, and it's clear they manage their newly found connection with Western Europe well. I wondered if, possibly, Slovenia is the real heart of Europe with so many foreigners and so much activity. A tiny heart, given its size, growing on the beats of thumping rhythms.

The city, capital of a country right on the edge of Italy, Austria, Hungary and Croatia is filled with tourists. The coast caters to summer tourists, the northern edge of the country, sharing the alps with Italy and Austria, allows for good skiing.
Surprisingly, the hostels in Ljubljana only open in summer, when they're all filled to the max. When, some months later in October of the same year, I went back to Ljubljana, I ended up in the 'Sports hostel', half an hour by bus out of town. Now, I had to settle for a hotel. Not very cheap, but quite good.

Crossing the border between Croatia and Slovenia gave me the impression of returning to Western Europe: Lots of checks with high quality equipment.

And suddenly it's cold

A day earlier, I enjoyed the sun in nothing but a t-shirt. Now, I had to put all my clothes on to withstand the icy cold on this Sunday morning in fog-covered Ljubljana. I was told that fog is a daily returning morning ritual for this city and, indeed, when I visited the city again in October of the same year, I was welcomed by the same fog.

I wanted to get out of bed as early as possible to avoid having to stay in the same expensive hotel for two nights and after getting out of bed, the only other people I met on the streets were either going to church or tourists.
My first stop was to be the left luggage department at the train station, from where I would leave for Bled later in the day. The 'non-stop' wardrobe had decided to 'stop' for a while and no-one at the train station had any clue who was in possession of the key. After 30 minutes or so, an employee strolled to the left luggage department and opened it up for me so that I could rush into downtown Ljubljana. A bit worried, since what would happen if the place was closed when I needed to get my train in the evening…

And indeed, it was closed when I got back. Anticipating this, I had arrived quite a bit too early, allowing time for kicking someone in the butt, if needed. However, this time it only took seconds for someone to show up. Some two hours later, the ultra modern and ultra hot train had brought me to Lesce-Bled. Now I needed a bus to get to Bled.

Related:  Julia and a secret mission
This text is available under a cc-nc-a license.