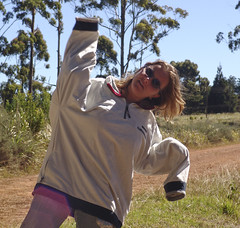 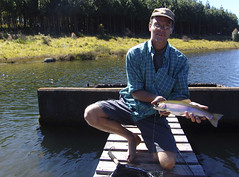 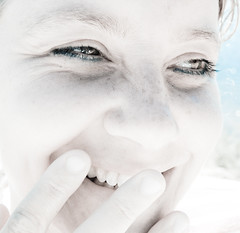 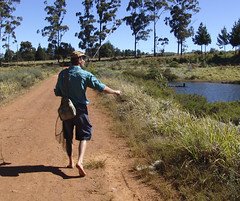 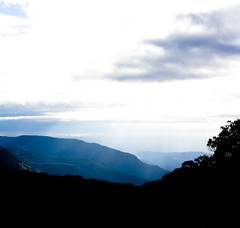 We were stupefied by the amazing view from the balcony of the lodge, looking out over mount Inyangani and the Honde valley, with Mozambique in the distance.

John had tried to talk me into fly fishing and wanted to get up early. But after rise and shine at 7am, it lasted until 9:30 before we finally left. The alcohol of the previous night had taken it's toll on John.
At the tiny lake, John tried to get me enthusiastic about fly fishing. Wayne didn't succeed in doing this on our first trip to the Eastern Highlands and John didn't do any better. I wizzed the line back and forth a couple of times and then took out my book to read.
John, however, was unable to stop. Talking to the fishes, his line, his rod (huhuhuh, he said 'rod') and the water, the man was busy for hours. Thank god he ended up with two nice trout.
After a lunch of grilled trout, we headed off to Mutare, were John crossed the border into Mozambique and we headed down to Vumba.

Again, we had left too late, so we arrived at Ndundu lodge shortly after sunset. The place, although expensive, is run by a Dutch/Belgian couple and is sweet, resembling a southern German guest house, reminiscent of the Grimm fairy tales.
Again we staid up late, this time downing not even one bottle of rum, talking about Bart (the Dutchman) and my funny taste of music.

Related:  Relaxing on the beaches of Mozambique
This text is available under a cc-nc-a license.