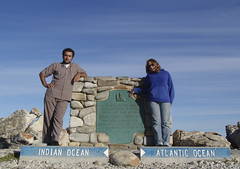 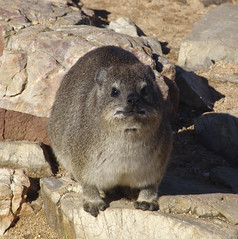 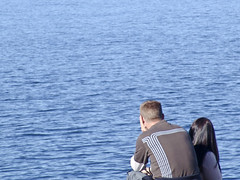 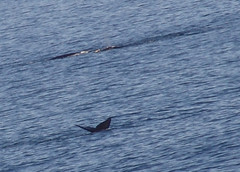 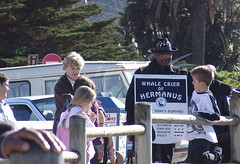 No wine on Sundays 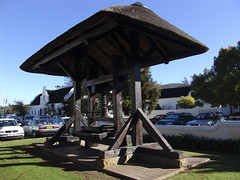 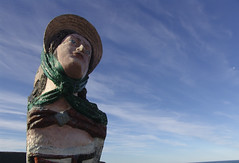 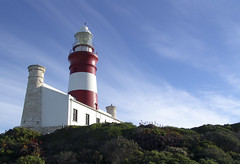 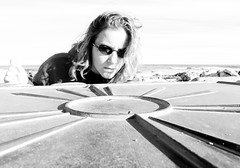 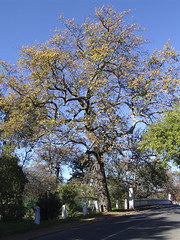 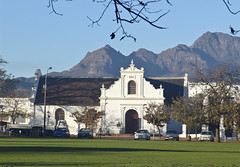 Contrary to popular belief, the Cape of Good Hope is NOT the southernmost point of Africa. It's the lesser and much less touristy Cape Agulhas. It's quiet, tourist-free and there's only one tarmac road going there. And we didn't take it. Instead, we drove down on dirt roads where, although the scenery is nice, I constantly was in fear of blowing a tire.
The view from this cape isn't that special, besides the very nice lighthouse, the second oldest in Africa, which was modeled on what the lighthouse in Alexandria was supposed to have looked like.

Last night, we had to fight to find a place to stay in Stellenbosch. The first two lodgings no longer accepted tourists so we ended up at the Stumble Inn which appeared to be overflowing with 20 year old youngsters. I had some time to surf and read email, but the fact that the bar was, in effect, outside didn't make it a pleasant place to hang around since temperatures were slowly dropping to close to freezing.
We had dinner at the excellent Bukhara and woke up early to stroll around town and enjoy the nice Cape Dutch architecture. Interestingly, as many blacks are flocking to the cities and whites are flocking to the suburbs, Stellenbosch has also seen a significant influx of whites over the last decade and an exodus of blacks. Maybe the Afrikaans university in town helped in this one.
By chance, we also stumbled on an exhibition by Keith Dietrich, called 'Horizons of Babel' where he "explores how images construct knowledge and investigates the relationship between the centre and periphery" displaying novel ways of using maps.

Related:  Of Hastings and London

Before arriving on the cape, we stopped by at Hermanus to watch whales splash and play. The town has an official 'whale crier', a guy who should blow his horn as soon as whales are spotted in the bay.

We drove on to Montagu to spend the night and had dinner there at the slightly sterile Jessica's, where I had a very decent Ostrich stake. We started talking to Dominique and Iona, a British couple who had been living in South Africa for years.
Over the past four months, whenever I spoke with (white) South Africans, all of them seemed to be rather wary of the future, where they feared that, after Mandela's death, South Africa could go the way of Zimbabwe. Dominique countered that by saying that white South Africans have a rather negative world view. Meanwhile, he claimed that three of his family members had been killed in farm repossessions in, of all places, Zimbabwe.

Montague is not much more than a one-street town, which turned out to be a good introduction to the Karoo, we would be driving through the next day. The CalTex gas station in town was selling coffee from a thermos, but no tea and pies from a freezer.
At night, it was even colder than in Stellenbosch, but thanks to a movable electric heater that kept on beaming through the night, it was just bearable.