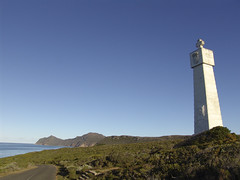 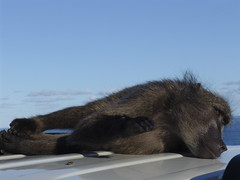 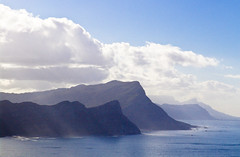 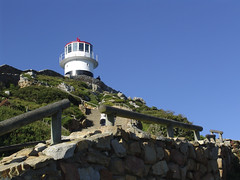 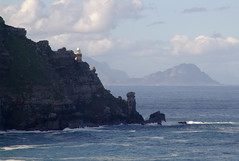 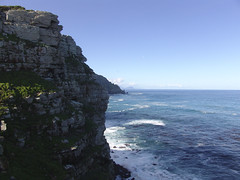 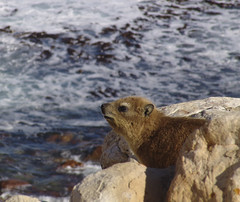 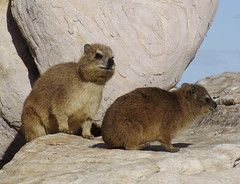 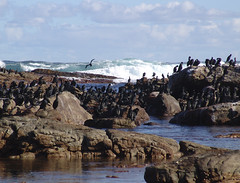 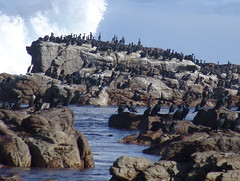 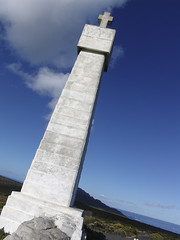 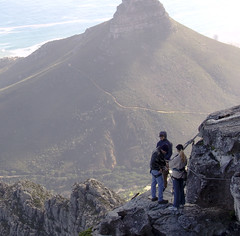 Going down the hard way 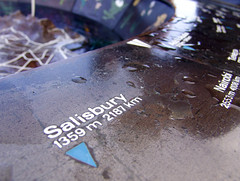 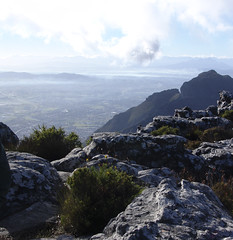 A busy day, we started off by renting a car from AVIS, which we would end up driving on a zig-zag route through the country, dropping it off on the other side, in Nelspruit, on the border with Mozambique.

I had wanted to tour Table Mountain the previous day, but the weather just wasn't up for it. In any case, climbing Table Mountain can be tricky for the sudden changes in weather. So we took a nice and comfortable cable car, after which we got a tour of the sights from a distinguished 69 year old gentleman who couldn't stop talking about the beauty of nature on and around the Cape. Then man had cycled around Holland in the 50s and had been to Zimbabwe in the 40s. Upon departure, he made sure we would say 'Hi' to Bob, on our return to Zim.
When we went up, the sky was perfectly clear. Shortly after, we could see the 'tablecloth' forming but, by the time we got back down again, the sky was, again, a perfect blue. The layer of clouds, the tablecloth, was formed so quickly that we could actually see the cloth building up, clouds being formed right in front of our eyes.
The view from the mountain is magnificent. And we bumped into what I believe was the vice president to the Chinese communist party. It was announced on telly and radio he was in town that day and, on top of the mountain, we saw four Chinese characters walk around, one small fellow with three HHUUGGEE cameras, taking pictures of everything the other Chinese did.

There are lots of stories to be told of the mountain. There's two I really like. The first is that the mountain is the only geographical feature in the world that has a constellation named after it. The second is that, according to (Dutch) legend, the nearby Devil's Peak got its name after the Dutch pirate Van Hunks challenged the Devil to a smoking contest, after which so much smoke was generated that the tablecloth was formed.

After Table Mountain, we drove down to the Cape of Good Hope, named by Diaz on his way back from the east side of what is now Southern Africa. Although it's close to Cape Town, it's still a relatively long drive, but the scenery is spectacular.
The Cape is actually two capes: The Cape of Good Hope and Cape Point. Tourism focuses on Cape Point, where there's a restaurant, two light houses and millions, well almost, of baboons trying to steal sandwiches from visitors, one of which being successful when we were there.

Also, the cape is home to two monuments, the Diaz Cross and the Da Gama Cross, in memory to these two great explorers who both rounded the Cape. But these crosses also serve a purpose. When they line up, sailors can deduce the location of a reef and steer clear of the danger.
We tried to steer clear of the many tourists and headed out to Stellenbosch, a lovely city with heaps of what is called Cape Dutch architecture in the middle of South African wine country.