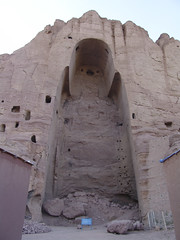 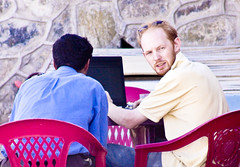 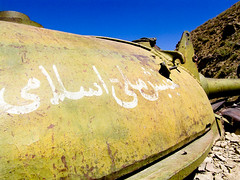 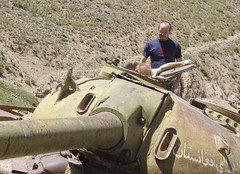 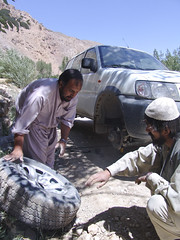 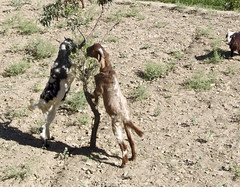 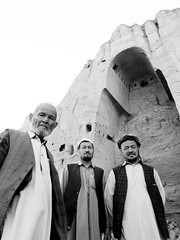 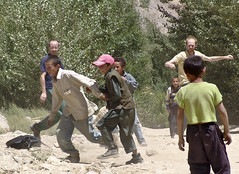 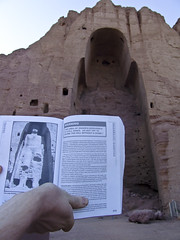 On the road from Kabul to Bamyan 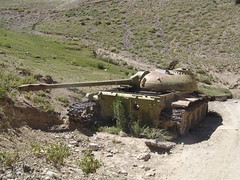 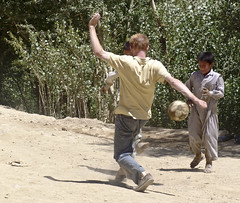 The Bamyan buddhas in the distance 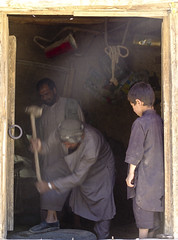 Leaving early for Bamyan to, in case of trouble, still get in before dark, I was suffering from something of a hangover from the previous evening, high on Albert West.
Sadly enough, I forgot my bottle of whisky, specially bought for the trip. What's more, as it turned out, Giovanni also forgot his wine. And his beer.

It's less then 240km from Kabul to Bamyan. It took us nine hours, one of which was spent waiting to get a puncture fixed. We still had what is considered a short drive.
At first, I had hoped for a flight to Bamyan. PACTEC flies for only 50 bucks one way. A very welcome alternative to a nine hour drive. However, already three weeks ago, all flights were booked until the 31st of August.
The second 'airline' that flies to Bamyan, UNHAS, a UN organization, clocks in at 100 bucks per one way ticket. We decided to drive.

Getting a similar sweet deal as Lev and I got for our trip to Mazar, DACAAR was so friendly as to lend us one of their very nice 4×4 Nissans. The trip was nice, but I can't really say I'm looking forward to another eight hours drive back to Kabul. A flight sounds very inviting.
One major downside of flying both ways, though, is the lack of a vehicle in Bamyan. You can see the buddhas, or rather, you can't see the buddhas, on foot. The second major attraction, Band-e-Amir, the first of a couple of amazingly beautiful lakes, you have to do by car, another 3-5 hours away. So if you fly in, you have no choice but to rent a car for at least one day, probably more.
And then there's the rumoured option of renting a plane for the day from Kabul, at 400 dollars per day. A very reasonable alternative, assuming 4 or more people fit in. It will allow for a visit to the buddhas and a flyover of the lakes.

Related:  Brazilian dress sense, and lack of it

On Monday, I had spoken to Ed, calling from Bamyan, telling me that the only available hotel was fully booked. There are two hotels, 'Roof of Bamyan' and the 'Bamyan Hotel', but the first one isn't an option because 40 Japanese archaeologists have booked that one for the next couple of months, searching for the rumoured 300m long 'reclining buddha'.
The Bamyan Hotel, also considerably cheaper, at 15$ per head, instead of 40$ seemed to be going to cause a problem, not being available.
Arriving at around 4pm, we found no guests but two reclining locals in one of the 'gers' in the garden. We could hand pick the rooms we preferred.

Both hotels overlook the sandstone wall from which the buddhas were cut, some 1700 years ago and the view is spectacular during the whole day. Just lounging in the garden is already a decent way to spend your time, although Bamyan, at over 2500 meters high, does get cold in the evenings, even in August.