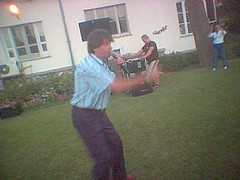 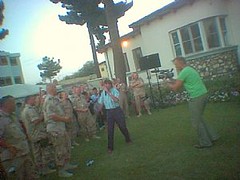 If you’re Dutch, you might have seen the short video made by the Dutch contingent (PRT) in Pul-e-Kumri. Supposedly, it’s something of a music video, using a song by the, at Dutch standards, infamous Albert West.

The video clip was something of a cult hit and, as a result, this Dutch contingent was able to get that very same Albert West perform at the Dutch embassy in Kabul. What’s more, he’ll go on a tour of the country.
SBS6, a Dutch commercial channel, is following the man like bees follow honey. You might just have caught a bit of it on TV, where you can hear me shouting in the background.

Related:  Dams
This text is available under a cc-nc-a license.