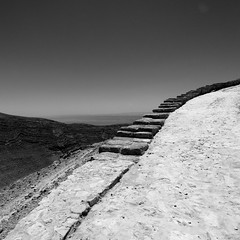 Where John lost his head 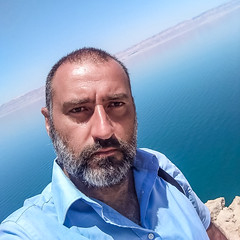 At the Dead Sea 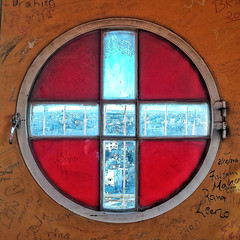 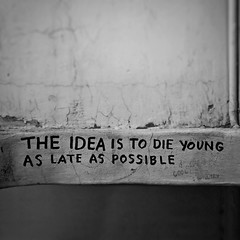 The idea is to die young as late as possible
World » Jordan » Madaba » St. John the Baptist Church

The Jordan valley, separating Jordan from Israel and Palestine, is part of the same schism, rift, that runs from Hatay in Turkey, all the way down to lake Albert, and beyond. The Dead Sea is about 400 meters below sea level, and shrinking. With the lowest point in the Dead Sea another 300 meters down.

The views from the mountains lining the shore on the Jordanian side are impressive. This includes the view from what once was a castle, fortress, or palace, of Herod Antipater, the alleged murderer of John the Baptist. Herod, supposedly, after being impressed with how the daughter of his new wife danced for him, asked her what she wanted in return. Asking her mother, who had been angered by John disproving of Herod divorcing his first wife, told her to ask for the head of John on a platter. Herod agreed.
John’s burial was supposed to have happened not too far away, in a little town close to Nablus, now in the Palestinian Territories, but a few hundred years later, his relics started to be dispersed all over the Christian world. First to Jerusalem, then to Alexandria. The head disappeared but was eventually manifested by revelation in the mid 5th century in Syria, while the decapitation cloth, whatever that really is supposed to be, resides at the Aachen Cathedral.
(Interestingly, Aachen has a fair share of relics. Besides John the Baptist’s decapitation cloth, it also has the nappy and loin cloth of Jesus, and a dress of Mary, no less.)
The head still officially resides in Syria, but, historically, alternative locations existed, including places in Germany, Turkey, Italy, France and even England.
Other relics of John can be found far and wide. One claimant to having the left hand of John is a church in West Bengal, India.

Another juicy claim relates to Halifax in West Yorkshire, where, as patron saint of the town, John’s head appears on the city’s official coat-of-arms. One story bases the etymology of the town’s name on the combination of the words ‘holy’ and ‘face’, suggesting that a relic of the head, or face, of John the Baptist once might have existed in the town.

The present-day Christian legacy in Jordan is limited. Nowadays, most christians in Jordan reside in the town of Madaba, roughly halfway between Amman and the Black Sea. But, even then, only about ten percent of the town actually calls themselves Christian.
Here, I stumbled upon a Christian mass, in the Church of the Beheaded John the Baptist, of course. The mass was in Syrian (Syriac?), and was led by an Iraqi Christian from Arbil, in Iraq. Himself one of the 100, or so, Christian Iraqi families that had fled northern Iraq in late 2012 and, now, was based in Jordan, waiting for a visa for either the US or Canada.

For that matter, Jordanians are close to being a minority in their own country, having, for decades, taken in refugees from Palestine, Iraq and Syria. This has generated some dissatisfaction, mostly related to Jordanians claiming that ‘all jobs’ are reserved for immigrants.
The jobs might not actually be reserved for immigrants, but plenty of the immigrants, particularly the ones that arrived decades ago, have been quite entrepreneurial, perhaps giving preference to hiring those that are closer to themselves.

The Christian heritage of Madaba can also be found in that restaurants serve beer and arak, while liquor stores are easy to find. So, at my hotel, the owner, after dinner, asked if I could mind the shop for a few minutes, while he went out to get himself some whiskey.
After his return, two friends joined in, bringing their own bottles of whiskey, all locally made. The doors were locked and the beverages were consumed in copious amounts.
I had to be pulled in to the conversation, with the World Cup, games being played that very day, being the topic of the day. Half in English, half in Arabic, with the hotel owner translating, the narrative flowed from the merits of the current Brazilian soccer team, via Brazilian top models, to the explanation of one of the hotel owner’s friends preference of having anal sex with police women. His English was succinct: “I love”.

Related:  Of travel and tests

The next morning, I drove back to the airport to drop of my rental car. I had been on the lookout for offering rides to passersby, so far without success. But now, a young boy was looking for a lift. I offered.
As payment, he offered to share his coffee.
Jordanian radio was playing Eurovision songs.

It’s cliche, but, truly, Jordan’s best asset is its people.