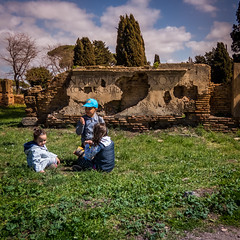 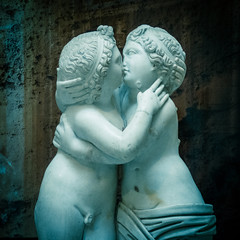 There's something in your eye 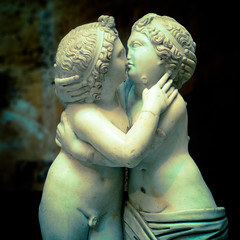 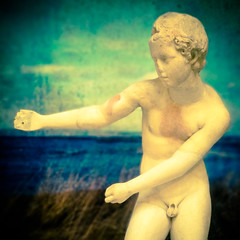 Behold the field in which I grow my...
World » Italy » Ostia » Ostia Antica

Rome, so close to the sea, isn’t on the coast. Instead, it’s Port City was Ostia, the word being the plural of the Latin ostium, for mouth (of the river Tiber, which flows through Rome).
Ostium was in it’s prime from a few centuries BCE, to a few after. It first lost its military importance, in part simply because Rome had conquered the Mediterranean, first becoming a commercial hub, then also ceding that to a newer port, just to the north, exactly in the present day spot of one of Rome’s airports.

Ostia Antica is what is left of the old Roman port town; now a vast set of ruins. And, due to the shifting Tiber and the silting of the river’s mouth, like Rome also no longer on the coast.
I found the sprawl mildly interesting. There is very little figurative work left, outside a few restored mosaics. Also, because the city was very active until the sixth century, most artefacts and excavations are comparitively new.

The on-site museum thankfully does have quite a few recovered statues on display, most dating back to the second century CE. Here, the most surprising part were the features of the carved faces. Many were so recognizable as to be almost caricature; all straight from, say, a modern period drama, made for TV, set in ancient Rome.