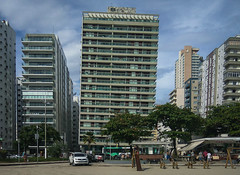 The leaning towers of Santos 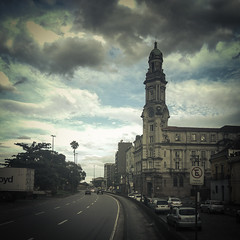 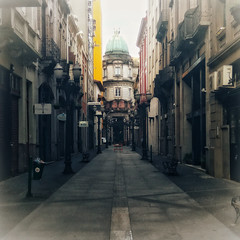 Santos, 90 minutes to two hours away from Sao Paulo, is the megacity’s beach and port town. Rio’s beaches are better in almost every way, but the Santos beaches are not bad at all. And, the water in Santos is warmer and quieter.

We went over to Santos to take it easy and do our own traditional Dutch new year’s dive.

Intriguing, and not immediately noticeable, but unmistakable once you spot it, is that dozens of the apartment buildings on Santos’ shoreline appear to be about to fall over. Some dangerously so, ready to topple on to the neighbouring buildings to start an Olympian-sized game of dominoes.

The problem, of course, is the soil.
Until 1968, no particular requirements existed for the foundations of multistory buildings and the first apartment buildings were only given a few meters of foundations. Then, when the first buildings that had gone up started to compress the soft clay and quickly started to tilt, Santos amended its building code and foundations were required to go deeper.

Perhaps surprisingly, none of the leaning buildings were ever taken down, and only one was straightened, at a cost of 1.5 million US dollars. Residents stay, probably partially because of the sea view, and partially because the price of their property plummeted after the slant became visible.

The leaning towers of Santos are not the only things putting Santos on the map. The beachfront park is the largest in the world; the port is the largest in Latin America; the city has a Pelé museum, home of the soccer club with which the man became famous, and a coffee museum.
The first coffee was only planted in Brazil in 1727, reaching Rio by 1770. By the 1840s, Brazil had taken the top spot in the list of the world’s coffee producers, and has been there ever since. Now, the share of coffee as a part of Brazil’s export has been on the decline for decades, but is still significant. In 1950, it reached its peak, covering 64% of Brazil’s export. Meanwhile, Brazil is also the largest consumer of coffee in the world.

Coffee is, still, mostly only produced in the states of Minas Gerais, Sao Paulo and Parana, with most coffee going through Santos, where the price of coffee, during the boom of the 19th and early 20th century, was set at the ‘Coffee Palace’, now a nice little cafe.
The building is topped with a 40m tall clock tower where Ceres, goddess of agriculture, and Mercury, god of commerce, look out from either side of the entrance.