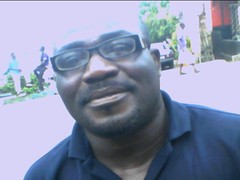 Sometimes, you have to have faith in people, or, give a sob story the benefit of the doubt.
On Monday, sitting at my favorite internet cafe, I was approached by a French speaking black man, claiming to be from Togo but living in Guinea (Conakry). He claimed all his luggage was stolen (sure!), that he was a diabetic (uhuh!) and that he had a little bit of cash, but wasn't able to buy his, also stolen, insulin (right!). In fact, all he needed was some money to buy insulin, after which he would inject it with me there, just to show he wasn't scamming me (of course!).
He was in touch with his wife (he still had his phone), and she had tried a Moneygram and Western Union money transfer, but, so he claimed, both no longer operate from Guinea. This is plausible, though not easily verifiable. To get money, he had had his wife set up a bank transfer, but that would take a few days for the money come in, supposedly on Thursday.
Also, so he claimed, he had visited two pharmacies in town, from which he knew that the cost of insulin was above his current means. I asked him which pharmacies he had been to and, the luck, one of them is owned by a friend. I called the friend and, surprise, he confirmed that, indeed, a French speaking black man had passed by, asking for the cost of insulin, claiming to not have enough funds.

Sounds legit-ish. So I went on a little adventure.
It was already late in the day and, taking a shared taxi to town, we ended up finding as many open as closed pharmacies, but were able to get the right insulin, from the fifth open pharmacy, just before closing time (and me paying for it). Then, indeed, he injected the insulin right in front of my eyes. Now, it's possible he did an impressive switcheroo, but if not, this showed that Komla (born on a Tuesday), was at least a diabetic, if possibly a scamming one.

Related:  The leaning towers of Santos

He was going to call me Thursday, after receiving his funds, to get me my money back.
Not so. Sadly, Komla was unreachable himself. For days on end. Sadly, another example of misplaced faith.

So, I present to you, the face of an insulin thief. Komla was ok, interestingly enough, with me taking a photo of him, with my crappy phone, which does lend some credibility to his actual story. And though he tried calling me once, on Tuesday, a call which I missed, it's not very hard to call again, whether in or out of country.
Who knows, perhaps he's dead.

More adventure happened on the same Monday I went in search of insulin. Delayed by only a year or so, the ACE undersea cable beached in Freetown. Somewhere in the next year, perhaps March, it will be the conduit for all high speed internet trafficked in and out of Sierra Leone. The ministry of information (whose website no longer functions) sent out a press release, inviting all Sierra Leoneans and interested parties to attend the ceremony. Only to not list a time and by sealing off the venue.
I went over, shot some photos, and then was kicked out by an army colonel. "We have state press. We don't want anyone snapping here."