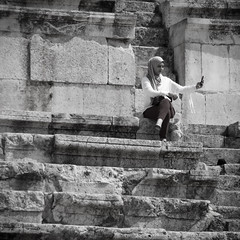 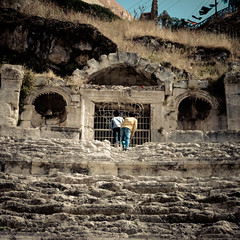 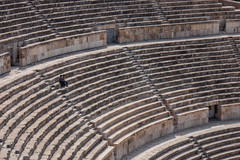 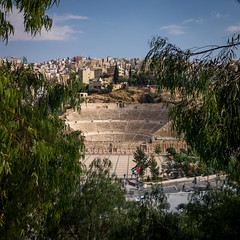 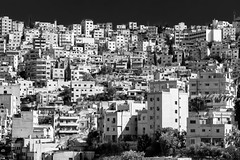 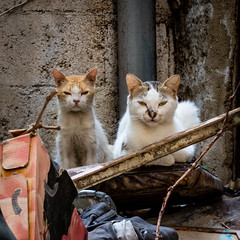 The gang is waiting 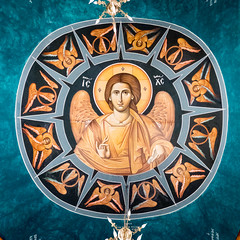 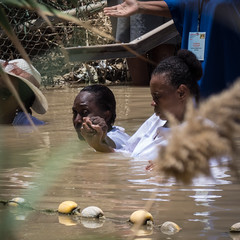 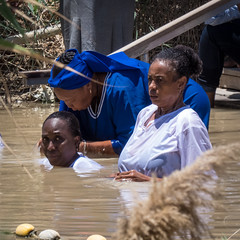 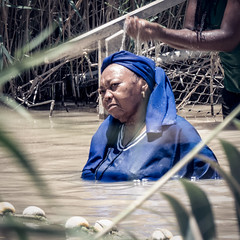 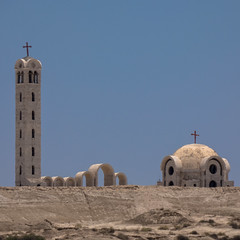 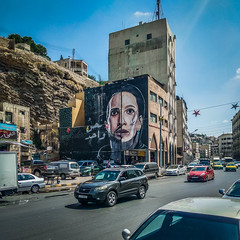 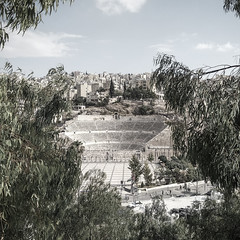 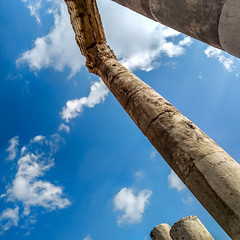 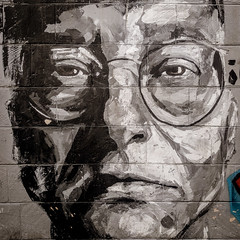 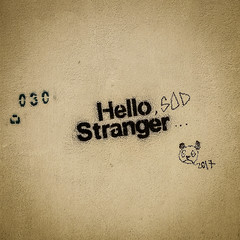 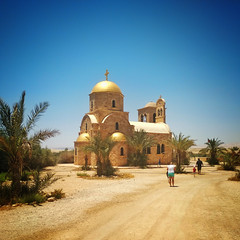 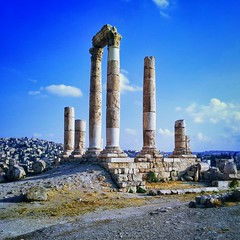 In the middle of Amman
World » Jordan » Amman » Roman Theater

Surprisingly few tourists were on my flight from Cyprus to Jordan. But there were lots of young Jordanian families with kids, and lots of young Americans who did not need a visa, probably making them Peace Corps or similar.
The tourist tax was 40 Jordanian dinar, about 50 Euros. The immigration booths all carried MasterCard and Visa signs, but neither was accepted.

For the small country that Jordan is, and one that’s seldom in the news, it has a huge and broad history.
One of the oldest statues in the world, at 8000 years, was found in Jordan; one of the oldest dams in the world, at over 5000 years, is in Jordan; World Heritage Sites include the site were Jesus supposedly was baptised.
Then there is the mountain from which Moses saw Israel, then died, the Dead Sea, home of the Dead Sea Scrolls, and the valleys where Lawrence of Arabia fought for Arabian Independence.

More problematic, most of these sites, and many other worthwhile to visit, are almost impossible to get to without your own transport. Public transportation is limited, even on the small distances at which many of the sites are from Amman, while car or driver rental is painfully expensive. Even more so if you’re traveling on your own.
Then, because it was low season, the tail end of Ramadan, none of the organised group tours were running.

In Amman itself, there’s not too much to see, though. The inner city citadel and a superb Roman amphitheater are the main sights. A nice museum and a budding art scene are what remains.

Related:  I must be on my way

I decided that Jesus’ baptism site, Bethany, warranted a visit. Renting a driver with car, the hour’s drive and ninety minute tour was interesting enough.
Over the years, the Jordan river has slightly shifted, meaning the original baptism site is now about 50m away from the river, at places only a few meters wide. Where the Jordanians allow you to enter the river, under the watchful eye of the country’s military, pilgrims on the other side of the river, on the Israeli side, are so close that it’s easy to talk to them, without even much raising your voice.
Though only the Jordanian side is a World Heritage Site, the Israelis spent noticeably more money on embellishing their claim to fame, with the visiting crowds to match.

When I arrived in Amman, I took the airport bus to the north bus station. But, from there, I still needed to take a taxi to my hotel, or figure out the hopelessly obfuscated public transport system.
As the bus arrived, a bunch of taxi drivers scrambled to their newly arrived pray. They refused to agree on a fixed price in favor of using the meter.
But, the standard for displaying prices is not consistent in Jordan, sowing confusion for visitors.
Like in some other Arab countries, the currency unit is subdivided not in 100 units, like cents, but in 1000 units.  As a consequence, a price of, say, two and a half dinar, can be displayed as 2.500, 2500, 2.5 and, as the meters in the taxis at the northern bus station did, 25. Painfully confusing. And if the only local you have at your disposal is someone who actually wants you to be confused, a situation that’s annoying and ripe for conflict. And a conflict it was.

Related:  With captain Ali in Gallipoli

My Jordanian taxi driver reinforced my innate dislike for taxis and even made me consider moving to Uber.

Thankfully, the attitude of the taxi driver turned out atypical, as far as Jordanians go, widely known for their hospitality; on the last night of Ramadan, I ate at a local restaurant, so popular that the street-side tables stretched for perhaps 100 meters of sidewalk. A few stray tourists had occupied a table and I almost was tempted to ask if I could join. Instead, I asked staff where they had room for one, and was seated at a small table with two brothers, and had a wonderful evening, where I was unable to convince the brothers to not pay for my dinner.

In short, I received some brotherly love. Topical, as Amman was once called Philadelphia.
From about 1000BC to 300BC, the city, as Rabbath Ammon, was the capital of the kingdom of Ammon. But it was Ptolemy II Philadelphus, son of the Ptolemy who founded Ptolemaic Egypt, general of Alexander the Great, who renamed the city in his own honour, after conquering it.
Ptolemy gained the sobriquet ‘philadelphus’, brother-lover, as a consequence of his own insistence of providing divine honours to his parents as well his sister and himself, after having married his sister, both becoming co-rulers of Egypt, setting up a long dynasty of inbred pharaohs on the Nile.