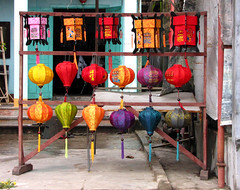 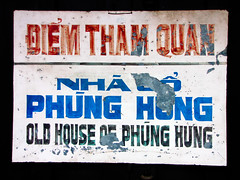 The old sign of the old house of Phung Hung 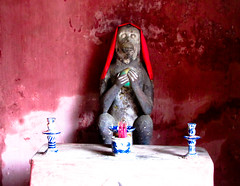 Monkey at the Japanese covered bridge 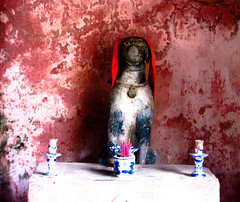 Dog at the Japanese covered bridge 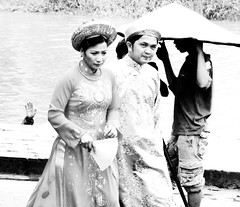 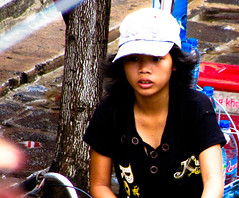 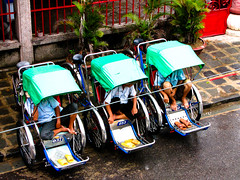 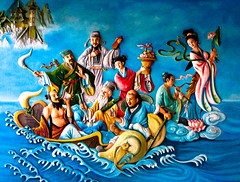 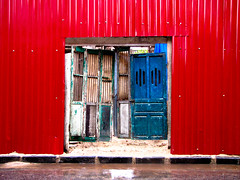 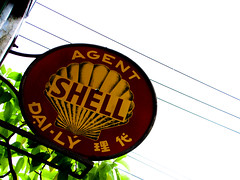 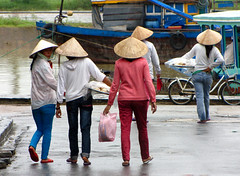 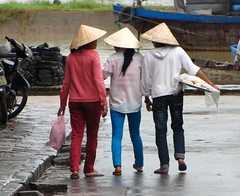 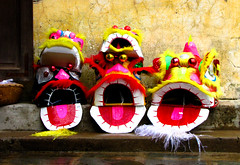 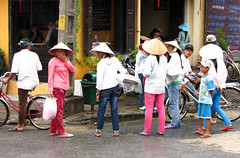 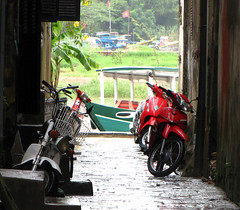 Bikes on the river 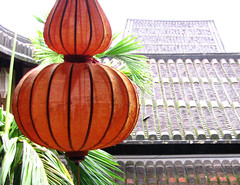 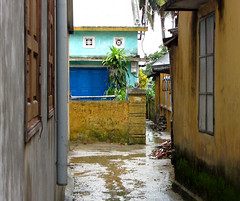 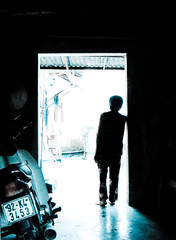 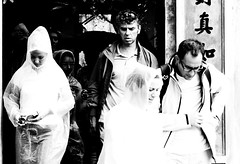 Are these happy faces? 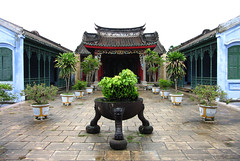 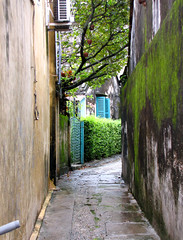 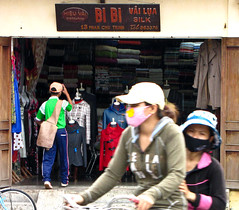 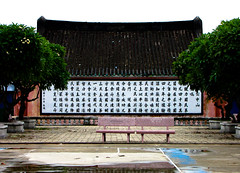 Chinese writing on the wall 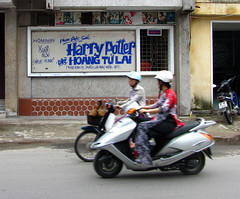 You can not escape Harry Potter 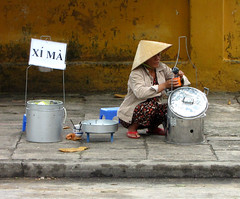 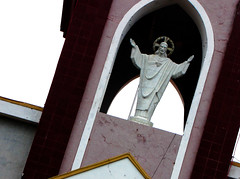 How big a fish? 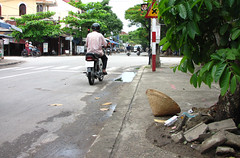 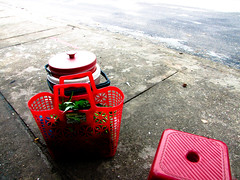 You put the chicken in the basket

Arriving in Hoi An, it started to rain, badly, which didn’t really stop until my last day in Saigon.

I’m not really getting older, other tourists are getting younger and dumber, more and more treating every out of the way destination as extensions of Ibiza. In other words, spending only a good week in Vietnam, it’s hard to stay off the tourist trail. In fact, I suspect that, even when staying longer, it’s not straightforward to stay out of the tourist hotspots, possibly even harder than it is in Thailand. Unfortunately, unlike Thailand, there seems to be a strong distinction between venues visited by locals and venues visited by foreigners.
Open Tour picked me up from my hotel in Hue, driving me to Hoi An, for a mere 3 USD. If one is short on time, how can that possibly be beaten, and even then. Halfway, we stopped at the typical tourist trap restaurant. Though the drinks and food were not unreasonably priced, the icecream was too expensive. Leaving, I accidentally stepped into the wrong bus, a proper sleeper, with double beds stacked on both sides of the isle. Although looking reasonably comfortable, I still wouldn’t trade these in for a sleeper on the train. Driving styles, here, are atrocious.

In rainy Hoi An, I stayed at the Vinh Huy hotel, a bit run down, but clean and reasonable, though the second night in my room, the fan, then the aircon, then the boiler broke down, one after another. No wifi, but they have an indoor pool.
The tiny burn I sustained on Tony’s tour of Hanoi has turned into a huge scabby patch, much more typical of such burns and something that’s easy to spot on, mainly, girls in Chiang Mai. Still oozy, it wouldn’t be too great to dive into the pool with that. Then again, it might result in me having the pool to myself..,.

In the evening, in the drizzle, I walked into the old town, not too impressed by the ‘charming city’. I ended up having dinner at Streets, one of several restaurants in Vietnam with a mission, supporting disadvantaged and/or handicapped children.
The prices are a bit higher, but everything, from the setting to the food to the waiters and waitresses screams boutique. The experience was good and although at first it’s hard to verify a restaurant’s claim on its social commitments, the real downside is that the restaurant could have been anywhere in the world. The look and feel is just too generic.

The next morning, I finally discovered egg sandwiches off the street, very munchable and cheap, at only 10.000 dong, 40 eurocents. As a bonus, you get to see the traffic flow by. No girls in cute uniforms though, only cute girls on bikes and scooters in regular clothes with shorts that regularly are, really, too short.
After my sandwich, I couldn’t help but get a second one. Walking on, I discovered a lady selling xima, the name of the most typical African dish, also known as pap, sadza, ugali and posho. In Africa, it’s a maize meal porridge. Here, it’s a sweet black porridge, not totally appetizing.
After I sit down, a Vietnamese girl came and sat next to me, also ordering a cup of xima. I asked her if she likes the stuff on which she replied that she didn’t know, she’d never had it before in her life.

Hoi An’s old town is a world heritage site, with many of the buildings in the city protected by UNESCO. This means you have to buy a combined ticket at one of the ticket outlets which will then allow you to visit some, but not all, of the many sights. In case you want to see them all, you need to buy several tickets. Though I’m not that daring, quite a few of the venues don’t care for checking your ticket.
Across from the main ticket office, I sat down, at a street stall, and had a black coffee, with milk. In Vietnam, the milk is sweet and condensed and, typically, forms a plaque at the bottom of your glass of coffee, which you then have to try and stir into your drink. Here, I got the shot glass of coffee, with the milk at the bottom, inside a larger cup with hot water. I suppose to make the gooey milk easier to stir.

One corner of the old town has a large number of upmarket hotels, restaurants and cafes. One, inviting enough, made me walk in to it and check out the menu, feeling like having something sweet, a desert perhaps. The sweets went for four to six dollars. The night before, I had had fried bananas in sugar and rum for under one dollar.
I moved on and, down the road, get a coffee, a banana milkshake and a coke, all for one euro.

The parallels between Hoi An and Melaka are obvious. Touristy, with strong Chinese influences, on a bank, one a river, the other sea, with architecture obviously dating from a similar time period. However, with Melaka being significantly more mellow and its people less pushy, I prefer the latter.
Also, Hoi An could do with a few upgrades to its world heritage sites, while I’m not at all sure that the dominating tourist industry is doing the town so much good.
In the pouring rain, I did the obligatory walking tour of the city and ended up at a small bar on the An Hoi peninsula, just across from the old town. The cafe sells yummy sandwiches at just over a dollar and draft beer at 22 dollarcents. It’s surprising how the heat makes it so much easier to drink large quantities of beer, as opposed to whiskey or rum, my regular favorites.
In the evening, having dinner at Cafe 43, the mugs of beer are even cheaper, at 16 dollarcents.