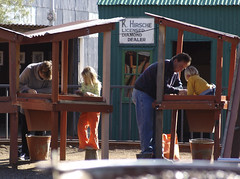 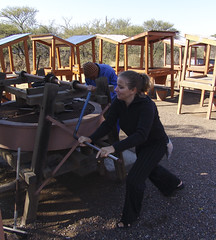 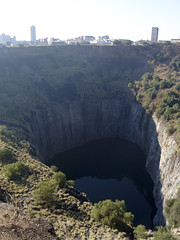 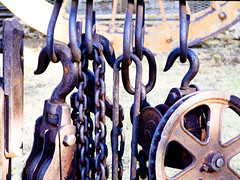 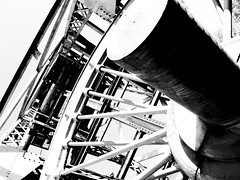 The wheels they are a turning 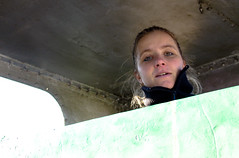 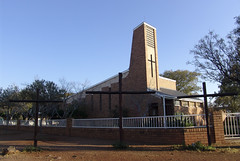 The day before, in the early morning, we had made reservations for the train to Kimberley. The ticket office should have opened at 9am. At 9:30, finally, some people appeared behind the ticket booths. Eight people were waiting to buy tickets and, in the evening on the train, these turned out to be the exact people who had made reservations for the trip to Kimberley. Busy busy busy.

The train ride was pleasant. It's a pity traveling by train isn't really the done thing in South Africa since relatively few trains make any of the long hauls that make train travel so appealing. For example, the Pretoria to Cape town train only runs once a day and the Cape Town to Durban only once a week! However, compared to the much more popular (and more expensive) bus connections, the trains are much, much more comfortable, although the network of tracks is rather limited. Then again, many of the trains have a BJ's on board, one of the many fast food chains operating in South Africa.

We arrived early, around 5am, and had a coffee and a sandwich before calling a taxi. I had called the hostel the day before and had asked which taxi service to use. When the taxi guy arrived, he told us he had been waiting for us but had gone to sleep when we didn't call right after the train had arrived. Yes, Kimberley is very much a village.
While hanging around at the train station, another fellow, Chris, had come up to us, asking if he could help with anything. We started talking and he invited us to visit his shop, a huge Fruit & Veg, right next to The Big Hole, the one thing Kimberley is famous for.
We stopped by the next day and were welcomed by Chris and a huge bag of bananas and it seemed he was going to give us half the shop if we hadn't stopped him. He also introduced us to a colleague of him, who was married to the granddaughter of one of the original 'De Beers'.

De Beers, the diamond conglomerate everyone loves to hate was founded by Cecil Rhodes, after he had bought out the brothers De Beer and sent them off to greener pastures with only a handful of pounds. He started digging on site almost immediately, after founding the company and naming it after the two farmers who had just left.
Meeting the husband of De Beers' granddaughter meant that Cecil John Rhodes is only four degrees away from me, which probably makes all the world's royalty available within six!

On what was the De Beers farm, nothing now remains but 'The Big Hole'. And big it is. Hand dug, 22 MILLION TONS of dirt were removed, to uncover only some 2500 kilograms of diamonds. The perimeter of the hole is almost two kilometers and it's over a kilometer deep. I vowed never to spend money on De Beers (they're nothing short of criminals), but we had to pay to get a good view of the hole. Well, so be it.

Some laughs for our Dutch friends

Afrikaans, at times, can remind you of some of the strange constructs the Flemish use. Here are some of the nicer ones: