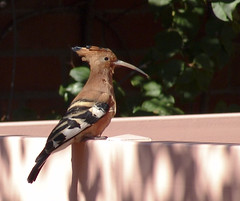 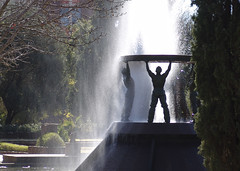 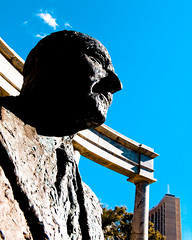 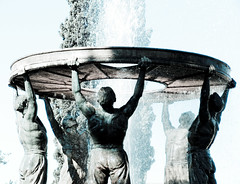 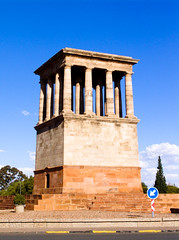 As northern South Africa is Boer country, the south, classically, is British country. Although you can still travel quite a bit further south from Kimberley, it is already part of (former) British heartland. Since the British' main reason for fighting the Boers was taking control of the soil's riches, it's not very surprising they wanted Kimberley.
We wanted to go on a tour of a working diamond mine, but we weren't successful. Although De Beers does organize tours, when I called, the operator sounded like she had never had the request in her life.
In stead, we walked down to the Honoured Dead Memorial, which is also home to 'Long Cecil', a gun used in the defense of the city during the Boer war.

We also visited the William Humphreys art gallery which wasn't all that bad. Most notably, we got lucky and bumped into Jeanette Unite, a South African artist who was just preparing an exhibit that would be opened that very evening. We started talking and got invited for the evenings ceremony with, yeah, free food and drinks. Her art, very abstract, uses materials from South Africa's mines so it's almost natural she had her exposition in this mining town of mining towns.

Although South African trains are quite comfortable, getting a ticket can be a challenge. It is required you make reservations before the train leaves its first station. Getting from Kimberley to Cape Town meant we had to get the ticket before our train left Pretoria, a good 12 hours away. We had tried making reservations the day before, but to no avail: the systems were down.
I had asked the guy behind the counter if he could keep trying and leave a message at our hostel upon success. When we got home the night before, I wasn't expecting a message waiting for us, but there was. Tickets had been reserved.
Our next challenge came this morning, when we had to try and pay for the tickets. The train stations normally accept credit cards, but this morning… the systems were down. On to find an ATM, which can be few and far between and, on top of that, don't all accept my bank card. It took us the good part of two hours to finally obtain the tickets today.

We also discovered former Rhodesian prime minister Ian Smith was made honorary citizen of Kimberley in 1979. Why?