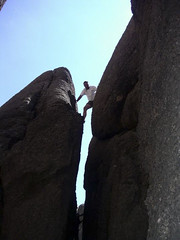 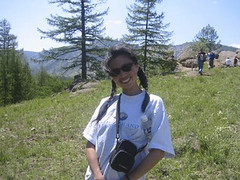 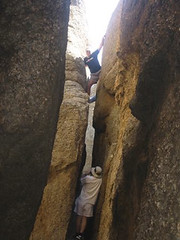 Stuck in the middle with you 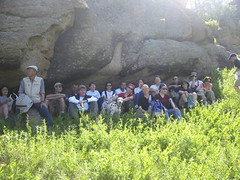 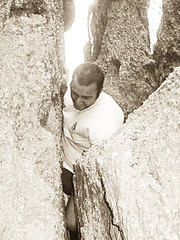 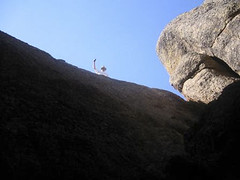 Note: All the pics with this article were either shot by Dave, Agi or Brigitte.

So I visited Terelj again. I came prepared and brought Gin's camera (remember, mine has gone to meet its maker), with two spare batteries. Turns out that all batteries were dead so I ended up, again, taking no pictures whatsoever. Thank god for digital cameras because everyone else DID seem to have brought his camera along.
My knee did well, although it was put to the test on Saturday afternoon, when we ended up doing almost a five hour hike. With the walkers, I first walked up to Turtle Rock. A rock that resembles, yes you've guessed it, a turtle. After climbing the rock, together with Henry and Rich, we ended up with the runners. That is, with Agi and Dave. Not that there was that much running, but the hiking was pretty bad, climbing range after range.

The trip was organized through the Hash and although it was only advertised 36 hours before departure on Saturday morning, a grand total of 20 people showed up. And it seems my several weeks of RA and stand-in GM has paid off: over the weekend, the first Hash handles were finally awarded. Mr. Yamada, always harassing Brigitte almost to death is now called The Terminator, Henry, for reasons only known to himself (well, not really, but hey), IS Trust Driver. And Agi, could it be any different, is Mountain Goat. Last Tuesday, I brought a nice bucket of ice, hoping that Dave, our GM, would be there so that I could focus on the bucket. But alas, Dave didn't make it and the bucket got lost on our transport somewhere.

Related:  So much to see in San Francisco

And, finally, I'll be really going into the countryside. Tomorrow the five of us (Henry, Bec, Jocie, Sarah and I) will be going on a ten-day trip, visiting places like Khovsgol, Kharkhorin and Erdene Zuu. I'm expecting none of the cameras to work.