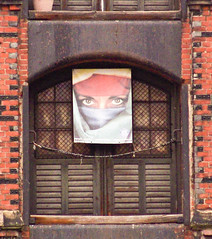 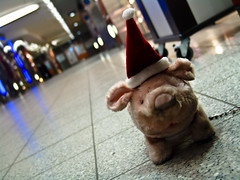 Of course, I had no choice but to visit the Afghanistan museum in Hamburg. Not that I would have if I wouldn’t be going there next year. Exactly as I expected, the museum was a small collection of only mildly interesting objects: faded pictures from the early part of the last century, a tourist guide from the 1970s, some clothing and jewellery and some wax-puppet displays. Some texts were translated in English, some in French.

The museum claims to have had no less then 120.000 visitors in 2003. This works out to about 300 visitors per day. I stayed for over an hour, lavishly drinking the free tea on offer, but only two visitors came in after me. Two older ladies who seemed to be lost.

But still, the museum does have potential. With Herat being conquered by Alexander the Great, Chinggis Khan and Tamarlane, it’s intriguing to discover the parallels between Mongolian and Afghani clothing and jewellery, as well as the most interesting game of buskashi, goat dragging, which appears to be a mixture of two of the three Mongolian manly sports, wrestling and horse riding. Playing buskashi, dozens of men on horses try to drag a dead goat to a goal post.
And the museum had a ger! Now, if there’s anything that’s MORE Mongolian, I’ll eat my shoes.

Related:  Waiting to get back
This text is available under a cc-nc-a license.