Just around the corner from Vaci utca

The lovely blue sky over the less blue Danube 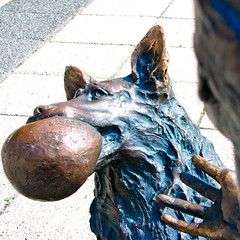 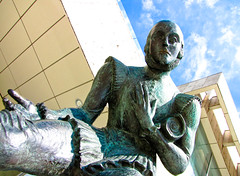 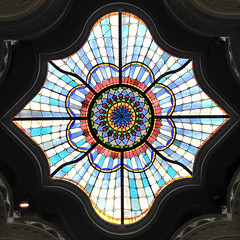 Colors of the Iparmuveszeti muzeum 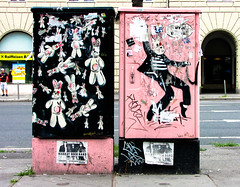 Dancing bunnies will take over the world 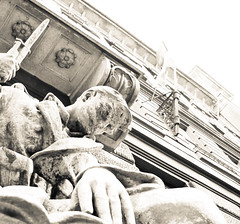 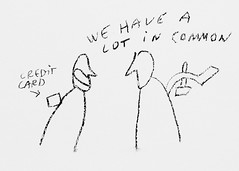 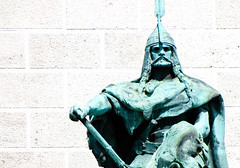 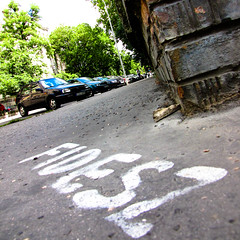 Fidesz is out on the streets 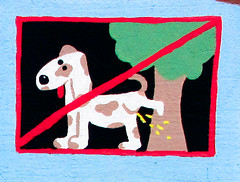 Dogs can't piss and have their tongue out 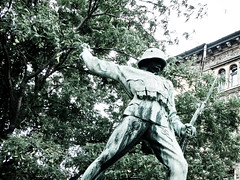 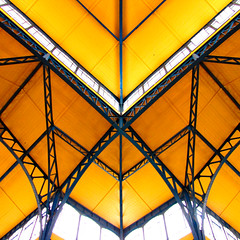 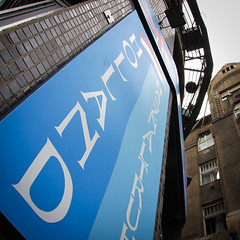 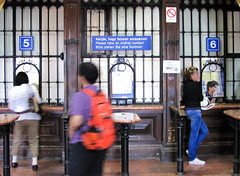 In Budapest, visiting Benno and passing through on our joint way to Belgrade, I visited a few of my old haunts as well as a few new ones. The foundry museum, not far from Moskva Ter, was a new one, but also not too spectacular, though well set up and, if you’re into casting iron, possibly even interesting.
The caretaker most certainly was rather passionate, talking non stop about iron and steel for several minutes to me, until he realised I really only got half, if that, of what he was saying. He was speaking Hungarian. When he asked what kind of work I did, I said I was a mathematical engineer. I don’t engineer with hands, I said, but with my head.

The Múcsarnok, a museum of modern art on Heroes square, had a reasonably interesting exhibition, Over the Counter, where some 30 eastern European artists presented their views on the switch from communism to market driven economies in post socialist eastern Europe. Though not all works were really directly related to the central theme, they did all focus on post-communist eastern Europe.
Another museum I visited was the Iparmúvészeti múzeum, or the museum of applied arts. The building itself is a stunning example of art nouveau architecture and the museum is known for its interesting exhibitions. This time, however, the steep entrance fee saw me visit two of the exhibitions, one on Hungarian art nouveau furniture designers, which was interesting enough, and one on the Indian dreamtime… except the latter was a collection of mediocre paintings from a Hungarian mother and daughter with Indian, that is, the Asian kind, themes. Quite a disappointment.

One thing which really has changed in the past few years are the awfully nicely renovated streets in several locations around town. One example is the area around Vaci utca, where sidewalks have been removed and the whole street is level, but there are plenty others. The downside of this is that the look and feel of the city is becoming more generic, starting to resemble downtown areas in major cities in, say, Germany or even Holland.

Earlier, with some trickery, Thunderbird and an extension not available through the Thunderbird website, I was able to kill a few hours, importing some 2000 emails from the 2002 – 2005 period, into my Gmail account. This should roughly be the three to four years directly prior to me starting to use Gmail.
Can you tell I was bored?

The voice and the verse

Budapest’s Treehugger Dan, a store where you can buy used books, rent bikes, order you coffee in bulk and buy artwork hanging on the walls, also regularly throws events.
This one brought together Irish musician Niall Connolly, the Irish poet Neil McCarthy and a host of backers, including one gentleman Eric Wilson Harris from Athens, Georgia, (who doesn’t have a website, but does have a semi-famous near-namesake) who did a set, solo. A pity I didn’t catch his name.

The first half of the show saw the poet and Harris do their stuff. The second half saw the three of them with backup band strut theirs.
The first half was most certainly entertaining, the singer mixing plenty of sci-fi themes as well as some existentialist references in his mellow tracks. But it was the second half that was excellent, the group working at its best when all were supporting mister Connolly in his endeavors.

Their currently nearing the end of their world tour. Be quick!