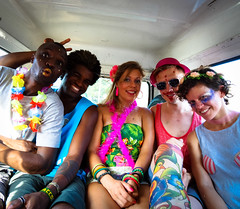 After several false starts, I managed, after a week, to sign up with Bike Rio, the shared biking system of the city. Not serving the favelas, I first had to take a metro and walk for a while, before I could hook up with a bike at one of the 60 or so stations across southern Rio.
It's cool that signing up is not limited to just Cariocas, even if the process is buggy. A bit more annoying is that the accompanying app leaves a lot to be desired. And there are simply not enough bikes and stations to go around. Even on a weekday, it's common having to wait around at a station for a bike to be returned. And signing bikes back in doesn't always work as expected, meaning you might end up with an unexpected extra charge on your credit card.

Generally speaking, public transport in Rio is quite slow, crowded, but also pervasive, either government run, or informal. It's difficult to not be able to get from virtually anywhere to virtually anywhere else virtually any time of the day.
During carnival, the metro runs 24/7, except on the last night. I ended up stuck, downtown, 30 minutes after the last metro had left. Me and a whole bunch of both tourists and locals. With some 20 kilometers between myself and my bed, I tried the bus network to get home, and failed.

The bus network, though frequent and everywhere, is also Byzantine. There does not appear to be a canonical source of information as to which busses go where, and no one seems to have meaningful information on any but the smallest number of routes. Add to that that busses appear to both display their origin and their destination, alternating between the two on electronic displays behind their front window, it becomes quite the hassle to figure out how to get anywhere.
The best source seems to be google maps, which fairly accurately gives you public transport routing information, though doesn't always seem to be correct and also seems to leave out the metro when building connections. Still, they must have gotten their data from somewhere.

Related:  Enjoying the beauty of the Topkapi palace together with Nobel laureate John Nash

Every Brazilian and every resident has a CPF number, akin to a social security number. In some Brazilian states, a seller can request the CPF of he buyer at every transaction, though this typically only occurs with larger transactions.
Related, when booking internal flights or long distance busses online, a CPF is required as well, though not when buying a ticket in person. Then, when boarding my first long distance bus, I was asked for my passport, even though my ticket was not in my name.