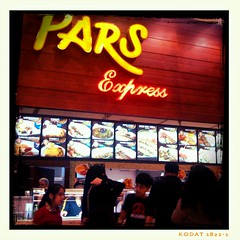 In part avoiding the obligatory 'airport parking fee' for when returning a rental car to Dubai airport, and in part because I wanted to take advantage of the shopping Meccah that is Dubai, I meandered around town in my twice-upgraded car, in search for a downtown office of Dollar rent-a-car.
Dubai isn't as badly signposted as Muscat, but the maze of streets wasn't helping much to find my way.

In the end, I discovered an office at the World Trade Center, where I chatted with a young Kenyan, fresh off the boat, now working as security at the ticket line, about to open up, to sell tickets to Dralion, Cirque de Soleil's latest show.

Afterwards, I ended up in the largest mall in the world, apparently, right next to the tallest building in the world.

The mall is truly a shoppers' Meccah, though not a shopper's paradise. At best, prices are identical to prices in Europe, say, but without sales tax, but because most available brands, here, are quite upmarket, you might get a relative deal, but you won't get it for little money.
Add to that the general costliness of everything from food to accommodation, Dubai isn't a budget destination of any kind.

Case in point, an on-the-spot ticket for heading up to the viewing deck of the Burj Khalifa, the tallest building in the world at over 800 meters and more than 160 floors, will set you back an astounding 80 euros.

In fact, where Oman was cheap for everything except accommodation, with the hilight being petrol at a bare 25 eurocents per litter, Dubai does have affordable petrol, but little else that is really cheap.

It does also seem that Oman does not (yet?) enforce copyright, whereas the UAE does, which does mean that apparent deals in Muscat might not be deals at all.