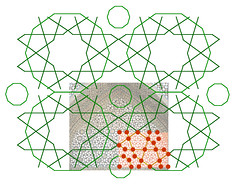 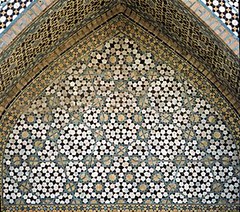 This article debunks a maths statement from a Reuters article.

Through an article at Slashdot I came across an article on Reuters which combined mathematics and Iran, two of my favorite interests.

The article talks about the pattern on a particular shrine in Esfahan, Iran. To illustrate Esfahan’s beauty to the uninitiated, at some point, a rhyme did the rounds saying “Esfahan is half the world”, suggesting that if you’d seen Esfahan, you’d seen half the world’s beauty, and that in one place. Esfahan is full of, indeed, beautiful mosques and shrines and you can find some beautiful pictures of Esfahan at my Iran photoset at Flickr.

The shrine mentioned in the Reuters article is called the Darb-i Imam (although mostly it would probably be called Darb-e Imam or Darb-e-Imam) and talks about a pattern above the shrine’s door, shown in the picture below (which accompanied the original article).

As you can see, the pattern’s very pretty. But the article overdoes it and roused my suspicion, starting with the leader “Magnificently sophisticated geometric patterns in medieval Islamic architecture indicate their designers achieved a mathematical breakthrough 500 years earlier than Western scholars, scientists said on Thursday.”
I’ll try to summarise the article in a few sentences.

According to the article, some decorative designs on medieval Persian architecture reached such complexity they appear to be “quasicrystalline” designs, according to Harvard University’s Peter Lu and Princeton University’s Paul Steinhardt. Quasicrystalline designs were first described by mathematician Roger Penrose in the 1970s and they are characterized by a set of interlocking units whose pattern never repeats, even when extended infinitely in all directions, and possess a special form of symmetry. [my emphasis – I will come back to this later.]

The article quotes Lu as saying it’s “[a]bsolutely stunning” and mentions that research has indicated that by the year 1200 an important breakthrough had occurred in Islamic mathematics and design, as illustrated by these geometric designs. Then, the scholars question whether the architects were aware of the underlying maths or just “got lucky”.

Debunking the article
I always tend to be suspicious of maths in popular news articles and this article was no exception. I might have heard of “quasicrystalline” before, but if I did, I’ve forgotten it. Here’s the definition from the article again:

Quasicrystalline: a set of interlocking units whose pattern never repeats, even when extended infinitely in all directions, and possess a special form of symmetry.

I was suspicious because the picture of the shrine clearly shows the pattern is symmetrical along a y-axis right through the middle of the picture. So I downloaded the image and started playing around a bit.
Typically, Persian Islamic motives are often quite complex but also highly symmetrical. In this case, the many dots of the pattern are surrounded by ten identical smaller tiles, suggesting it would make sense to work with 10-sided polygons. After a bit of playing around, below is what I came up with:

The original picture is in the background. The bottom right corner is coloured red, which I took as the base for all other points in the pattern. Inside the red square, in the pattern, several of the dots are connected with lines. I rendered those lines and mirrored them in all directions. And, lo and behold, an extremely regular pattern emerged, which featured large 10-sided polygons.

True, the overlaid green pattern doesn’t match the original pattern in the picture perfectly, but that seems to be due to distortions in the original picture.

Either Peter Lu and Paul Steinhardt are crap scholars or the Reuters journalist is crap at his job. I hope it’s the second.

Update
There’s also an article on BBC News about the very same thing but their wording is more reserved:

The Islamic designs echo quasicrystalline geometry in that both use symmetrical polygonal shapes to create patterns that can be extended indefinitely.